Traveling the remote roads and trails of the Ontario bush are often mysterious and filled with wonder. As I search for likely bear hunting sites I travel deeper and deeper into the bush until all other signs of human invasion disappear, only the tracks of the wolves, moose and bears dot the road as I explore each area.

You invariably come to a fork or intersection and must decide which way to go. When Barb and I faced these decisions in life the answer is easy, the road less traveled. These roads will no doubt lead you to more remote and more adventures. One cannot help but ask themselves the question; what is the history of this road? When was the last time someone traveled it? Will it ever become the road it once was? Answers I will never likely get but thought provoking nonetheless.
I think most fulltime RV’ers have this same philosophy as they too are drawn to the road less traveled. Forgoing the safety and security of careers and homeownership for adventure and the unknown. It is on these roads that I think about what it took to get Barb and I to where we are today. All the forks, turns and crossroads. All the ups, downs, steps forward, steps backwards that led us to where our lives are right at this very moment. Homeless and living in a trailer….. We could not be happier!
All those forks, all those decisions led us to where we are today. Unfathomable if you try and think about it. But here we are living out our dreams exploring the country. Thoughts like this often lead to the question; “Would you do it all over again?” “Do you have any regrets?” The quick answer is “yes” to both. We would do it again in a heartbeat and who does not go through life without making mistakes or having regrets. But thinking deeper yet, without those regrets or mistakes would we be where we are today?
So where are we today? Well, for at least the next 10 days we will still be in Ontario fishing, exploring and enjoying what this countryside has to offer. The week started with fishing contest between Barb and me heated and contentious. She was leading with this 25” beauty where my largest was a mere 23”. This week that all changed, but who has the lead? You will have to read on to find out!
I spent almost two full days editing and putting together our annual fishing video. We had such a good day it was hard to whittle the 30 minutes of video to a level where people would actually watch it. I still have a couple hours of work to do so hopefully I can debut it next week.
This week, with the “road less traveled” theme in mind we fished one of our favorite remote lakes. This is the same lake we filmed this short video on last year when I caught my biggest walleye of the year. So what better place to try and take over the lead in the Great Walleye Race of 2018!
With Barb leading this race for 3 weeks and only 10 days left, I was getting desperate. In the back of my mind I kept recalling the 27” monster I caught out of this remote lake last year. Could I duplicate this heroic feat and take the lead?  Would we catch anything at all? Or worst of all, would it backfire on me and Barb takes a bigger lead?
Talking to Chad, he assured me that no one had been to the lake since Barb and I were there last year and it would probably take some effort to get in there. He was right…. 4 hours of cutting brush and clearing the trail of downed trees later we pulled up to the lake shore on a 4 wheeler with boat and trailer in tow. After launching the boat I headed right to the spot I caught my big one last year with revenge in mind. What are the odds of catching a monster walleye in the same spot? Small, I would guess, but I was desperate and had to give it a try. Since I had marked the spot on my GPS I knew exactly where to go and dropped a minnow over the side.
Nothing, nothing at all…..we motored back and forth over the area covering the water just in case and then it happened…BAM, fish on! I knew it was big just by the way it was fighting and staying deep. As Barb watched me fight the fish I asked her to get the net ready as I thought it was a big one. When I finally got it to the top it was a big one but the wrong big one, it was a nice 35” northern.

Disappointed it was not a walleye but happy to catch such a nice fish I landed it, took a few pictures and slid it back into the water. 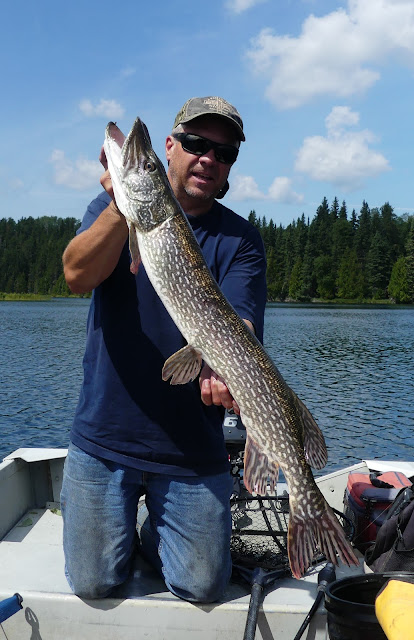 Next it was Barb’s turn as she pulled in a 23” walleye. Well at least the walleye are still here so maybe, just maybe there is hope. 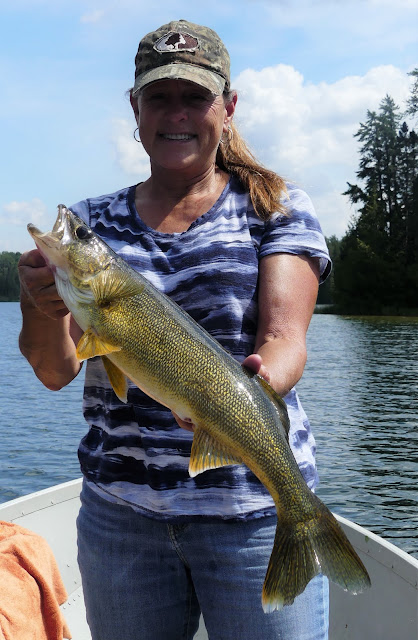 We each landed a couple of 24”-27” pike then...….. I hooked into another one that just stayed on the bottom and refused to come up! Run here, run there….. walleye or northern? I thought my last one was a walleye so I did not want to get my hopes up. Gradually I got it up near the surface so we could finally see what it was, a huge ‘eye’!!!! “Get the net!” I yelled. Barb promptly netted the fish and hauled it into the boat. We took a few pictures, measured it, slid it back into the water and I did the happy dance right there in the boat! Head bowed, with a defeated look on her face, Barb just smiled and said “Nice fish” With that I took the lead for the year by 2”s with the 27” walleye I caught within feet of where I caught one last year. My plan worked to a T! 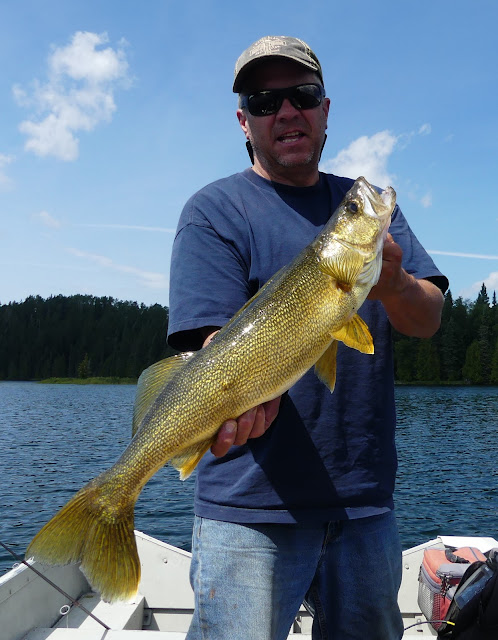 After that I told Barb I was not feeling well and needed to go home (not really but why give her a chance to best my 27?). Once home I started packing all the fishing equipment in the belly of the rig when Barb asked "What are you doing?" I reply "I've had enough fishing for the year, better luck next year Honey!"
Posted by Jim and Barb's RV Adventure at 4:17 PM