What a Year it Has Been!

As I started to write this post earlier this week I realized that it will be the last one I write in 2019. And what a year it has been. I can’t think of a year we have been so busy, it seemed like all we did was work on the house day after day after day....... Despite this when I look back at our travel map we did get quite a bit of traveling in.
We started out 2019 in New Brunswick Georgia making our way south to Florida where we visited, gorged ourselves with seafood and ran across lots of friends and my sister Judy.  Kayaking among the manatees, catching up with Jim and Brenda and Dan and Jeanie. Near Tampa we caught up with Jim and Diane, Dino and Lisa, and David and Sharon, even Farmer Bob and DeAnne came down for a visit! We also finally met Steve and Mona Liza, as well as getting to know Mike and Liz better since our brief meeting in Alaska in 2016. Mike is the one who has a brother who owns a couple shrimp boats and was nice enough to let me tag along for one night on the water! A week in Fort Myers with my sister Judy, husband Mike and all their friends was a whirlwind of activity! Just writing about it now makes us want to go back there!

Of course most of our year was spent in South Dakota working on ours and Kevin's houses, memories we will never forget. We are still in awe when we look at where we started in March...… 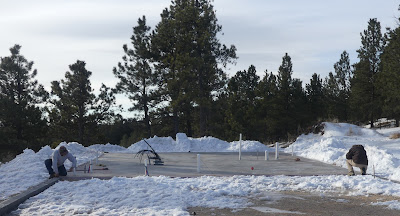 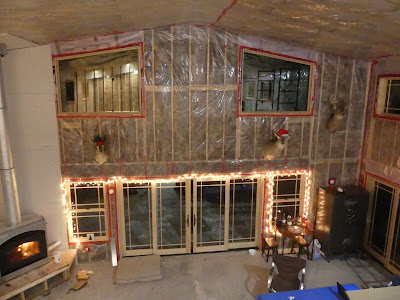 We cannot thank everyone who stopped to help enough. Especially Kevin and Cheryl but also Jim and Diane, Guy and Sue, Doug and Jan, Dan and Bonnie, Dave and Leslie, Doug and Lisa, Tom, Earl, Richard and Cheryl, Steve and Deb, Al and Ingrid, Dino and Lisa (Well, Lisa anyway....) and of course, our son Forrest! Wow, we cannot help but feel blessed with so many great friends who stopped by, visited and lent a helping hand....

We did manage to get up to Pasha Lake for a month and even over to Oregon to see Forrest, Somer and Lily. The bonus of that trip was Jessica and Shane flying in with their kids as well.
Our biggest regret was not getting up to the farm for an extended stay. I did manage to get up there for a day on my way to Pasha while Barb was in California helping out with her stepmothers estate. What a long and busy year!

So what have we been up to down in the desert? The week since Christmas has been wet and cool. Two days of rain meant we had to break out the generators to maintain the batteries. The rest of the week has been sunny but cool  with lows in the 30's and highs in the 50's and low 60's which is not horrible but the winds make it feel a lot chillier.

We did escape to Parker one day with Dino and Lisa and saw the movie Jumanji. Another day I just sat inside and read while Barb and Lisa ran to Phoenix to do some shopping. I actually don't mind these down days, it is nice to just have a "do nothing day" once in a while. 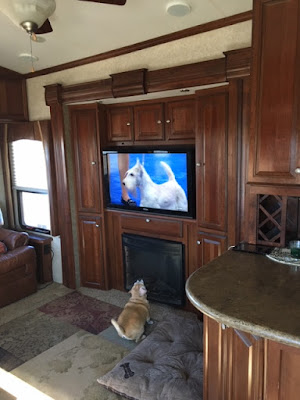 Friends Ray and Deb arrived on the 27th. They parked a little way down the wash so their dog Freya would have a better area to run. Deb invited us over for ham dinner on the 29th. Deb's cooking is world renowned and this is the first time she has invited us over for dinner.

It was everything we thought it would be and more! For the first time ever I had cooked carrots and liked them! The ham and scalloped potatoes were out of this world as well!
Red and Pam arrived on the 28th and are parked right next to us. We have not seen them since December of '17 when we stayed at Red's brothers place in Texas and went deer hunting. Since then they lost Dominic and have a new addition to their family in their pup Sadie.

Sunday was cool but calm so I got the drone out to take a few pictures of the area.... 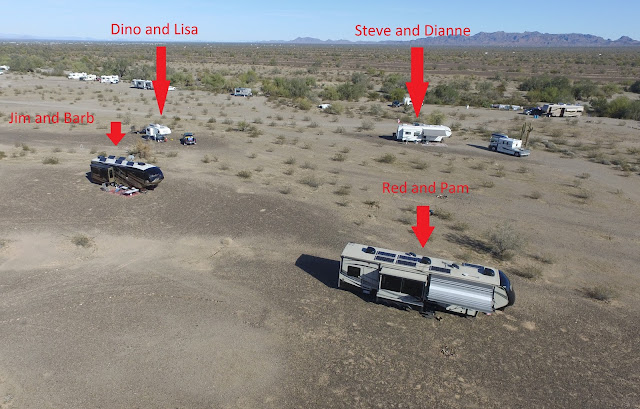 Monday was another a dreary but special day as it was my birthday! The winds were brisk and it did not get out of the 40's but we managed to have a happy hour thanks to Steve bringing his truck over as a wind block. Deb once again outdid herself with her tater tot appetizers! If you have never had bacon wrapped tater tots you have to give it a try. 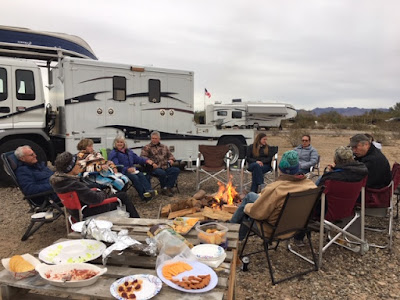 Our year will look something like this.....
This is just our tentative plans, we know we want to stop in Klamath Falls, Vancouver Island, Haines, Homer, Kenai and Fairbanks. We still need to iron out timelines and additional stops but that is where we are at so far.

Looks like it is going to be another busy year!
Posted by Jim and Barb's RV Adventure at 11:28 AM