Well, it finally happened. I had to go into the doctor. I started not feeling well the end of December. I can typically power through these illnesses without going to the doctor and I did this time too. Or so I thought. I started feeling well about 4 days later and was back at it at 100%. Then 4 days later it hit again. But this time I had symptoms that typically don't go away without some kind of medication so off to the doctor I went. But wait, our doctor in Hill City will not see me without a negative covid test from the clinic in Custer. The last thing I wanted was a 12' swab stuck up my nose! Barb called the Custer clinic and tried to get a covid test. They said that although some of my symptoms are "covid like" some are not so I should just walk into Urgent Care and see them about the symptoms I have where they will probably do a covid test as well. So off to the clinic I went. Because of my symptoms they would not let me in without an escort so I had to call them when I got there. A nurse checked me in over the phone then came to the door to escort me in. Directly to an exam room. Hey, personal service, so far this is not so bad! The nurse then went over my symptoms, she said she was going to do a covid test which would take about 15 minutes to get results. The swab was  easy peasy, just a small swab, Then the doctor came in and again went over my symptoms. When I told her I had been taking Amoxicillin for the past week you should have seen the look on her face! She asked me where I got those.... When I said Mexico I thought she was going to faint! Good humor. Ends up my test was negative but I did have a viral infection (No Dino, it is not an STD!) and she prescribed me an antibiotic.  If I would have just held out a few more days I would have cured myself! So although I have become a statistic here in South Dakota and I guess nationally, I landed on the right side of the equation....for now....

Daisy has powered through another week. The vet said that eventually the tumor will become so big that she will not be able to go to the bathroom so we watch her like a hawk when she goes outside. The funny thing is is that Daisy likes to hide when she goes to the bathroom. In the warmer weather she wanders off in the bushes so we cannot see her. During these colder spells she does not wander as far but she always turns her back to us when she is doing her thing. It is like "I can't see you, you can't see me" But she always peeks over her shoulder to see if we are watching and recently Barb is always watching. Barb watches for 2 reasons. One is to see if she goes, the other is that she is out there for so long, the deer get curious and walk up to Daisy to see what is going on. Barb often has to go out there and has to stand between Daisy and the deer!

I know this is the topic you were all hoping to read about when you opened our blog this morning and Dino, I hope you are eating breakfast. I just wish I could post a picture as gross as the one you posted of your puss fill scared up meaty hand the other week. I don't think I ate for 3 days after seeing that one! Anyway, for two days Barb watched Daisy and the poor thing would go out there, assume the position and try and try but nothing. So Barb kept upping her meds trying to loosing things up then one day success! Daisy is good for a few more days! She is in great spirits and is eating well so we just carry on...

On the house side we got the lower section of the stair treads and risers completely done. We went with dark treads and natural risers and love the way they turned out. 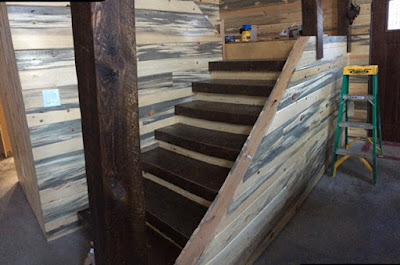 We also got the last few boards we needed to finish off the T&G in the hallway so we can cross that off our list.

The big news of the week is that we got our countertops! 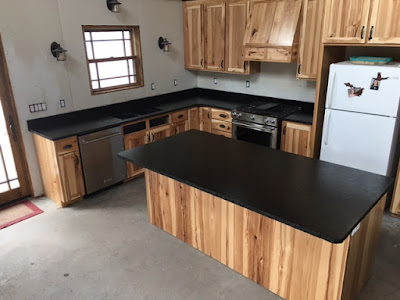 There are two pieces that make up the main countertop and how they joined them was quite interesting. They put adhesive between the two pieces and uses a vacuum clamp that drew and held the two pieces together. Unless you look really close you cannot even tell there is a seam there.

The countertops themselves are a leathered granite with a chiseled edge. The island is 84"x43" and the guys said it weighed about 750#'s. I also put outlets on each side of the island this week, installed the dishwasher and hooked up the sink so we finally have a fully functional kitchen! Still waiting on that darn refrigerator but thanks to Dan and Bonnie we still have our trusty old white one! 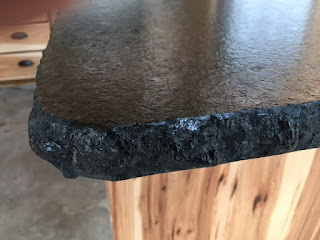 There was one hiccup though. They brought the wrong sink. Barb had ordered a two compartment undermount sink with a low divider. Well, they sent a two compartment undermount sink with a high divider. Barb was not happy. I did not think it was a big deal but apparently it is. I could not understand what the big deal was and Barb said "Let me put it this way, say you order a new bow, the bow of your dreams and you order the perfect sight to go on it and when you get it, the wrong sight was on it. What would you do?" Or she said something like that because all I heard was "Wah, wah, wah wah, You can order the bow of your dreams and a sight, wah, wah, wah. So guess what, I now have a black eye but I am getting a new bow!
By the way, they are bringing out a new sink next week. I wonder which will come first, her sink or my bow?!?!
Posted by Jim and Barb's RV Adventure at 5:42 PM