Thanks to everyone who sent their condolences on last weeks post regarding Daisy. We especially loved the ones that included your pictures and memories of her. She was a great dog with a big personality. We are slowly adjusting to life without Daisy. Everyday gets better. Dakota was lost for the first day or two but then she seemed better but the days after that, even to today, she regressed. As many of you know she was a rescue dog with some social issues. She was scared of everything, Barb and I included. She made great progress over the last couple of years and was a lot better than she was when we got her. What we did not realize was what a huge role Daisy played in that improvement. Now that Daisy is gone Dakota is a lot more withdrawn and is very skittish of even the smallest things; like us just walking across the room. Hopefully this will improve again over time.

One positive thing has come out of Daisy’s passing. That is it has revived our faith in humanity. Watching the news, one cannot help but lose that faith as the news sensationalizes everything by focusing on the radicals on both the left and the right. We received so many responses both on the blog and Facebook.  What Daisy’s passing and all the comments showed to us is that the news is focusing on the minority and that the majority of the population is in the middle and are really, really good people. So for that, we thank you also.

This past week was my week to try and injure myself. With the lower stair section finished it was time to tackle the upper stair section. I removed every other stair tread so Barb could stain and varnish them. While she was doing that I worked on the upper rail post. I am countersinking them below the floor and making them as tight we possible as we have had houses with wobbly stair posts and it is really frustrating!

So there I am measuring, cutting the post, cutting the floor, doing a little notching to get the post to fit just right when I step backward on the stairs to come at the post from a different angle. Guess what? There was no stair tread there and down I go! My right leg was on the upper stair tread while my left leg went through the open space causing me to bend in way a body is not supposed to bend as I fell backwards. Luckily (I guess) my leg wedged in that opening preventing me from falling any further. Barb was not home at the time so I extricated myself and just kinda sat there for a few minutes. Sore and bruised I was able to get back at it but I sure felt it for a few days!

I am happy to report that all the stair treads are done and back in place, the posts are in and waiting for railings and spindles which we are supposed to get next week.

Kevin and Cheryl came over last Saturday for a few hours to watch football and help with a couple of things above my pay grade.  But first Barb took advantage of her new island to bake Kevin a pecan pie! 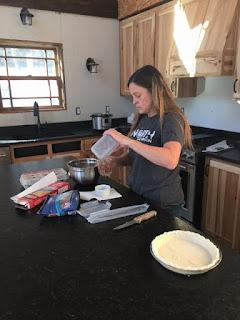 Our first job that day was scribing and fitting the vanity in the downstairs bath. You only get one chance at it and Kevin has years of experience doing things like that so I was happy he was willing to help.

The other thing was putting a 45 on the live edge slab to go above our wood storage area. Barb had found a place that sells live edge blue pine slabs that would be perfect for the mantle. She bought one that was 18” wide about 10’ and 2” thick. Since we wanted a live edge on the front and one end it meant that we had to 45 one end and then splice in a piece on the end to create a live edge on the side. Again, above my paygrade. Kevin made the cut, glued and used a Krieg jig to countersink some screws attaching the two pieces. It turned out great!

We also went over to Dan and Bonnie's two days to help them with their new house. Yes, they too are building a new house! They got the best contractor in the area (Kevin) who started framing on Monday and by Thursday afternoon we had the trusses all up!
Last but certainly not least we celebrated Kevin's birthday at the Pringle bar on Wednesday night. It was not his actual birthday but it was close enough to celebrate it. They even decorated our table and provided Kevin with his own bucket of beer, tiara and a magic wand! 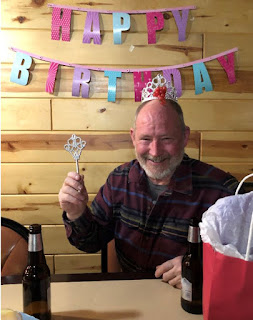 The deer are enjoying the alfalfa bale we bought them, a 750# bale lasts 2-3 weeks depending on the weather. But it appears this guy found a way to get the whole top layer to itself! 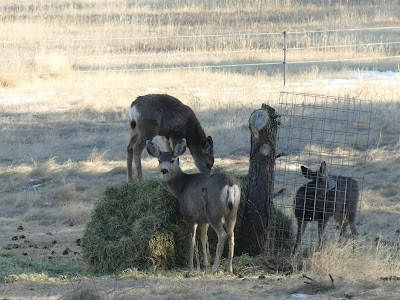 Posted by Jim and Barb's RV Adventure at 6:42 AM