A Look Back at my Dad's History

The last day and a half in Pennsylvania were a whirlwind. Packing, playing, and getting as much time together before our Monday morning departure. Barb and Kendall went for numerous walks, that is the one thing that Kendall liked to do the most. Strange for a 6 year old (almost 7), wanting to go on so many walks with her grandma but that is what she wanted to do. 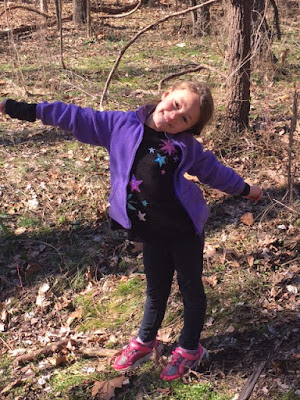 For our part, Dylan and I, we went “hunting” spending time in the woods, walking, listening and exploring. Dylan and I would walk through the woods stealth like and listen at all the sounds of the woods. We would pick out a target; a stump, a pinecone…… Dylan would take careful aim with his pellet gun and pull the trigger. He is an amazingly good shot and hit what he was aiming at more often than not. 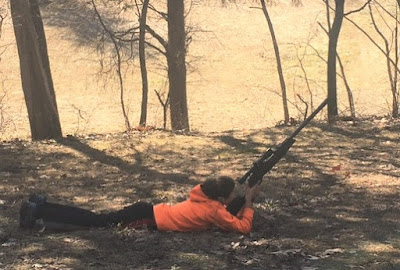 On our last evening there we enjoyed the nice weather outside and Shane cooked an awesome supper of steaks, mushrooms and onions. Everything was incredible! 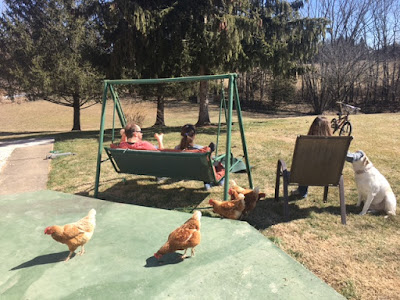 We also had a beer tasting of some very interesting beers. I mean, who could not resist drinking Unicorn Farts, Coconut Cream Pie or Dirty Little Freak beer? 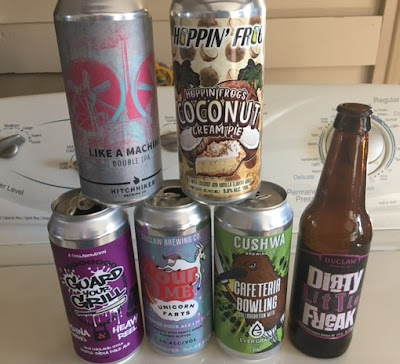 Too soon it was time to go to bed and our time here was over. We woke up the next morning said our goodbyes and were on the road.

Although we still planned on long days we also planned on taking a little time to explore. Our first day was just under 400 miles but we stopped for a couple of hours to stretch our legs at an antique store just outside of Dayton. We did not find any treasures for us but we did manage to find two more tractor seats for Farmer Bob!

We spent the night in Fairborn Ohio. It was a little out of our path home but well worth it. Each time we have passed through this area I had wanted to stop at the National Airforce Museum, this time we were going to do it! On the Wright-Patterson AFB outside of Dayton, the museum has over 360 planes and missiles in their 4 buildings from early aircraft to missiles, space craft, Presidential planes (they were closed), all the way up to modern fighter jets. And best of all, admission is free!

Since my father was in the Air Force I was particularly interested in the planes that he flew. So that was my goal when I went in, to see if I could find each of them. His first flight in the Air Force was somewhere around 1944-45 in a Piper J3 Cub. It was only a 1 hour flight where they put him through the paces to see if he was going to puke or could really handle flying at all. I will tell you right now, I would not have passed that test, the ferris wheel gives me the willy's! 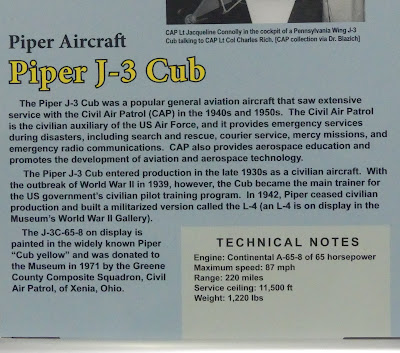 Next up was the PT-13 “PT” standing for Primary Trainer. 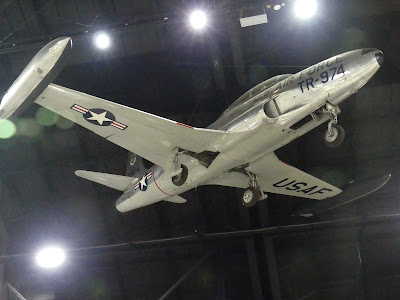 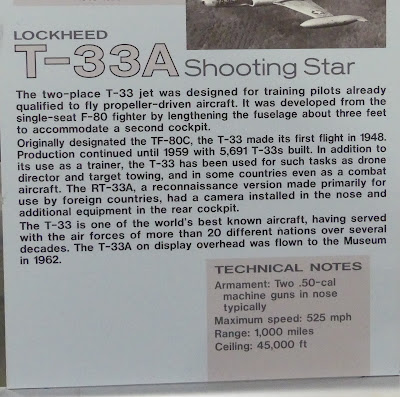 From there he went to the AT5 (AT=Advanced Trainer). This was the only aircraft that my dad flew that the museum did not have. Once he completed training we went straight to the P-51D. To me this is the most iconic plane of the era and had to be fun to fly. 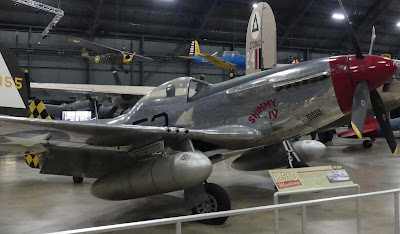 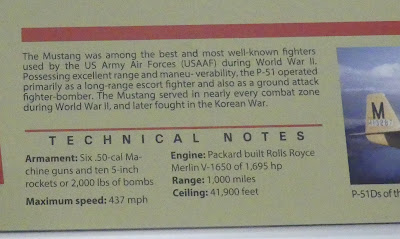 A little known fact is that you had to weigh less than 150lbs to fly the P-51. When my dad exceeded that weight he went to his least favorite plane in his career the B24 Bomber. Although it is a great aircraft, he did not like it for two reasons. The first is that it is a tank compared to the P-51 and when you go from that to the much slower B-24 I am sure it feels like you are going at a snails pace. The other factor was that there was an incident where he took off 3' of one of the wings and got into some serious trouble! 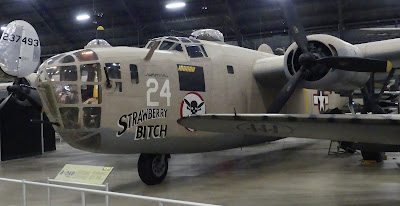 Those two things were incentive enough to get back down below 150lbs and he was soon back in the P-51!
From the P-51 he went to the F-80C, what  difference that must have been! With a maximum speed of 580 mph, this was the first American aircraft to exceed 500 mph in level flight.

Later in his career he flew cargo planes like the C-47.... 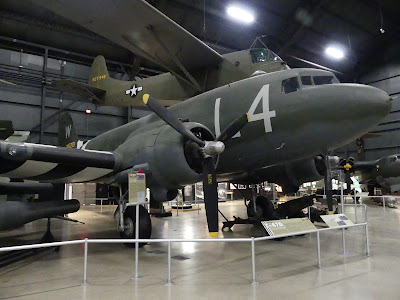 ....and the C-119 which is famous for its dual tails and rear opening hatch. 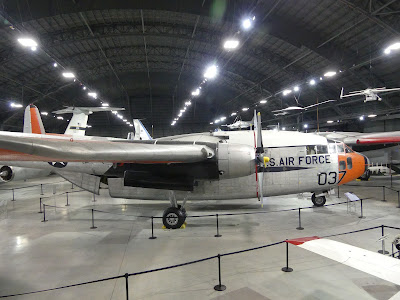 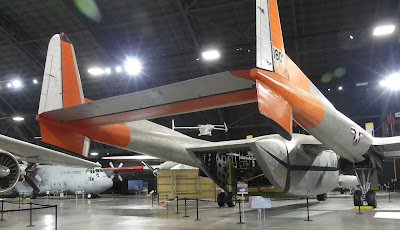 Overall, he served for around 20 years between his fulltime service and the reserves achieving the rank of Major. I always thought this was cool as a kid as he had the same name as that guy on I Dream of Jeannie!
Overall I found tour of the aircraft he flew incredible. I was never too interested in aircraft growing up and I was 3-4 years old when my dad left the reserves. And like any young child you are oblivious to anything in the world that did not involve yourself so I knew little of his Air Force career until later in life. A special thank you to my brother Rod for providing me with the information on his career. Rod was and still is very interested in aviation growing up and was my dads little flying buddy as my dad owned a few airplanes throughout his life. In fact, Rod still has all my dad's flight books which detail each and every one of his flights! 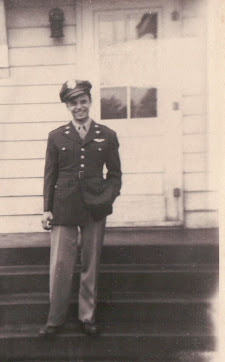 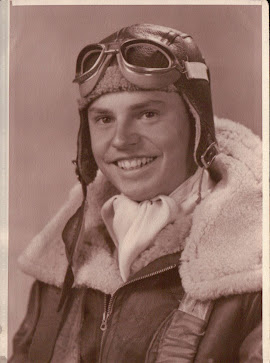 Of course there were hundreds of other planes there as well, it was really overwhelming would have taken hours to go through thoroughly. 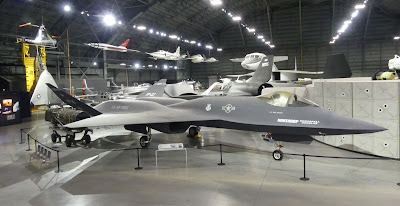 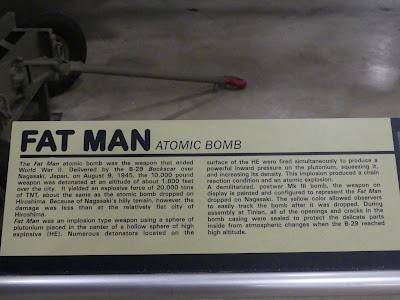 We were in and out in a couple hours as we had an appointment later that day up in Pendleton Indiana. While were in at Jessica's we received a text from Farmer Bob asking if we were going near Pendleton on our way home. Well, it was not exactly on our way home but close enough so sure, what do you need? He had been bought a bell for a project that he was working on back home and was wondering if we could swing by and pick it up. It took a little doing but we cleared some room in the back of the jeep by putting stuff on the roof rack but we were able to fit a 400# school bell in the back of the jeep!
We did not make it too far that afternoon, stopping in Champaign Illinois for the night. I was a little nervous spending the night in a motel with all that stuff on the roof of the jeep but when we woke up the next morning it was all there. Barb passed the time looking on her iPad for a dog, I think she joined every French Bulldog group on Facebook. I cannot even look at Facebook anymore as all I see are puppies! The other thing she did was search on eBay for treasures that we cannot live without. We learned an important lesson about bidding on items while traveling. Barb found this lure that I thought would be a nice addition to my collection so I asked her if she could bid $26 on it. A few seconds later she said "Oh crap". I asked her what happened and she said she was typing in $26 and fat fingered $257 due to the rocking of the jeep. She went to hit the backspace button to fix it which happens to be right next to.... the Enter button. You guessed it, she bid $257 on the lure! Luckily, it did not go very high and we bought the lure of $27.
The third travel day was our longest, almost 11 hours which took us all the way to Norfolk Nebraska. We opted to take a more southerly route as a snow storm was passing through just north of us. Our last day was (only) 7 hours and finally we were pulling in the driveway at home. We had received about 5-6" of snow the night before so everything was white and beautiful!
Guess who was there to greet us?!?! Kevin was there working on our hearthstone for the fireplace! 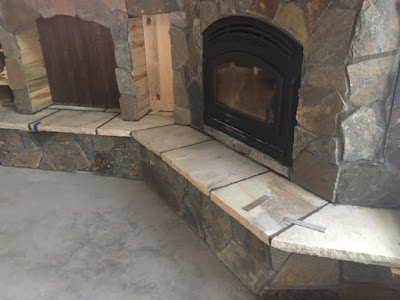 Not only that he had installed the stair railings while we were gone as well! 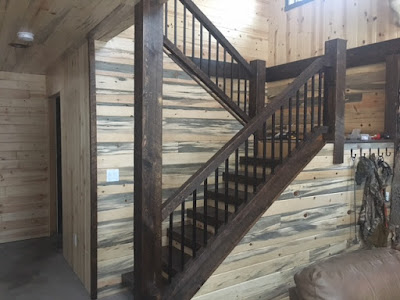 Do we have good friends or what?
As nice as it was to see Jess, Shane and the kids it was really nice to be home and sleep in our own beds. We are now reinvigorated to get to work on some more projects here at home. Hmmm, what shall we work on first?!?!
Posted by Jim and Barb's RV Adventure at 7:04 AM