Barb has a Very Special Birthday

There is nothing more peaceful than the sound of rain on the roof of a camper. It is the perfect day to read a book, watch a movie or even nap. For me it brings back memories of going up to “the cabin” in Northern Wisconsin when I was younger. The roof of the cabin was uninsulated so when it rained you could really hear it. We (my brother Rod and I) spent most of the day in our room reading Archie/Jug Head comics or a Hardy Boys book. He had bunk beds so when one of use would get bored we would push our feet on the person on top trying to launch them off the bed. More than once we totally dislodged the entire bunk bed and would get a whoop'in! Add in a little thunder and it is even better. So when we woke up the other morning with the sound of rain on the roof that is what we wanted to do, read, relax and just listen to the rain. But soon the camper door opened and two kids burst into the bedroom to see what we were doing. No rest Grandma and Pappy!

This week was filled with more work projects and antique adventures. Their property has an old barn foundation that had grown over with trees, vines and shrubs and Jess wanted to clear it out so we spent a few hours cutting and clearing. The rock wall hidden behind there is pretty cool and is well over 100 years old.

Shane and I also added a light to their entryway and one light outside their front door. Anything to keep us busy, we are not very good at just sitting around a relaxing, plenty of time to so that when we are dead!

Barb also had a birthday this week! As a matter of fact it was a milestone birthday, she is now eligible for SS. We celebrated by driving up to Lancaster Archery and buying her a release for her bow as well as a new bow! The release fits her like a glove. The bow is a little big, well a lot big for her but it fits me perfectly! She said that I am such a deserving and perfect husband that she would like nothing more than to spend her first SS check on a new bow for me! She is such a lucky person to have someone like me!

We went out to dinner at Rube’s Crab Shack in Emmitsburg. We were told they were best crab place in the area. Shane and I had all you can eat snow crabs, we did our best to get our monies worth! Boy, do they like their Old Bay seasoning up here, everything was coated in it! Jess had crab legs as well but not the all you can eat portion and Barb had clam strips. 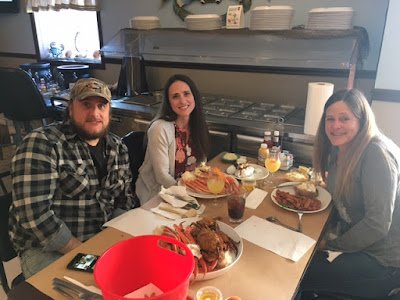 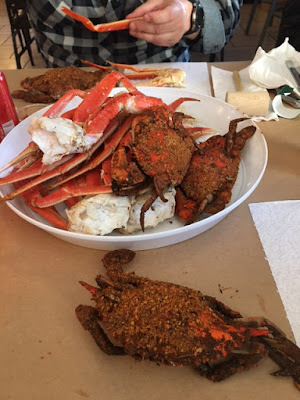 Meanwhile, back in Pringle South Dakota our “friends” were planning something quite diabolical. You know how they always say, don’t be the one to miss the meeting as you will get all the work? Well, don’t miss a burger night with your friends as you will get picked on by not only them but the entire bar! Especially when it is your birthday!

Since we are two hours ahead of South Dakota we were on our way home from dinner when we got this text picture….. 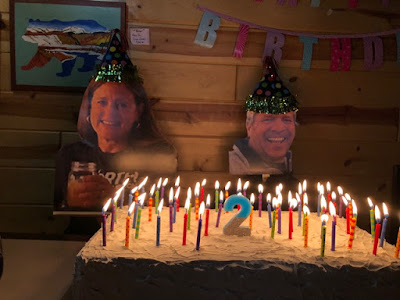 Which was followed by this one….. 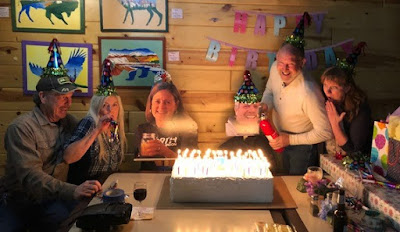 Apparently, us not being there was not going to stop Dan, Bonnie, Kevin and Cheryl from having a good time and not celebrating Barb’s birthday!

A little later this video comes through of Barb opening her presents!

A new rifle and a pair of binoculars, those guys know exactly what I…I mean Barb what wanted for her birthday!

Rumor has it we were passed around the bar like pan of brownies at a weed convention as more pictures started to show up. God knows what will show up in the future! Barb could be walking down the street and someone will probably shout out “There she is, the lady from those pictures!”

The rest of the week was fun but not nearly as eventful as that night. We hit a couple (like 20) more antique stores visiting every "boro", "burg" and "ville" within a 2 hour radius of Greencastle. This included not only Pennsylvania but also Maryland and Virginia. Here is our bounty so far:

One thing I am looking for are old outdoor books like 1970’s and older. I think it is cool to read old outdoor tales and see how much guns, decoys, ammo and other things were back in the day. I have a full bookcase I need to fill so if any of you find some cool hardcover outdoor books on your travels let me know! We also got a couple of vintage cast iron pans. Barb has never seriously cooked with them but would like to start. For those of you who know cast iron she got a Griswold #9 and a Lodge #6.
Of course, no outing would be complete without stopping by a brewery or two, or three....

I have a place up in the loft that I am dedicating to vintage waterfowl and fishing items so I picked up a few old wooden decoys and fishing lures. I like the old "working decoys" with some wear and character on them, not the new pretty decoys that were recently carved.

We also found a really cool sofa table at an Amish furniture store which both Barb and I fell in love with. 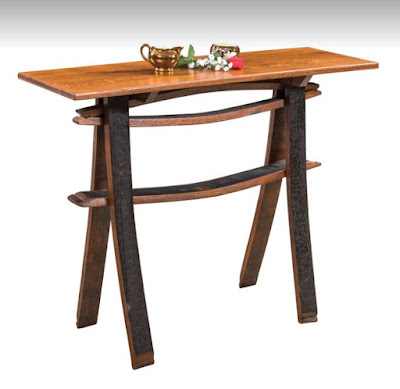 It is made out of old whiskey barrel slates and will serve as our bar. I know what most of you are thinking...it is not nearly large enough for our bar but we will make it work. I don’t know how we are going to get it home but we bought it! If it weren’t for all those tractor seats! DeAnne suggested chaining them to our bumper and dragging them home saying “It would shine them up a bit”.

Also, with so much time on her hands Barb has been on a full blown mission to find a puppy. Every time I look at her computer she is on a French Bulldog site. I think it is just a matter of time before Dakota as a new baby sister!

With no snowstorms and a full week of school, we did not get as much grandkid time as last week but we will make up for it this weekend. Dylan and I like to go "hunting" with his pellet gun while Barb and Kendall like to take Dakota for walks. Tomorrow is packing day, we will lay everything out and somehow fitting all of our treasures into the Jeep. We have a luggage rack on top that I have no doubt will be utilized. Then we have to try and book it back home as fast as we can as we do not want to miss another burger night at the Pringle Bar!

Posted by Jim and Barb's RV Adventure at 2:09 PM