Barb and I have worked on a lot of projects over the past couple years building our house. Building and raising our tall sidewalls ranks right up there as one of our most satisfying accomplishments. It was challenging as well as significant in bringing our dreams to fruition.

Hard to believe that this was two years ago!

Although not as challenging, over the past few weeks we have been working on another project that ranked right up there in the satisfaction department. When we bought our property in '17 there was a wooden cattle corral that straddles our property and our neighbors property. One of our first projects was taking it down so would could put our high tension fence up.

We saved the wood, not knowing what we were going to do with it but knew it would be good for something.... Fast forward 3+ years when Kevin said we should use the fence boards as an accent wall in our kitchen. At first we were skeptical and were wondering if he had gotten a bad batch of mushrooms at the grocery store but with open minds we finished a few boards and liked the look enough to move forward and finish them to the point where we could actually do the wall.

It involved a lot more time and steps than I had originally thought. One just does not varnish them and throw them up on the wall!

The first step was for Barb to lightly sand each board, enough to take the roughness out of the face but not too much where we remove the old character. 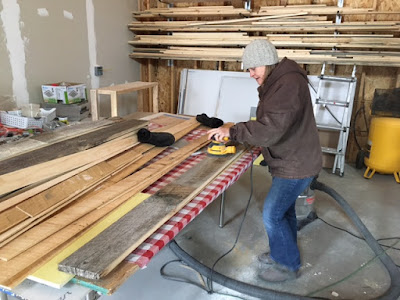 She then varnished them to bring out the grain. This may seem a little backwards as there was still a lot of work to do to them but we wanted to see what each board was going to look like finished and only let the best of them move forward to the next step 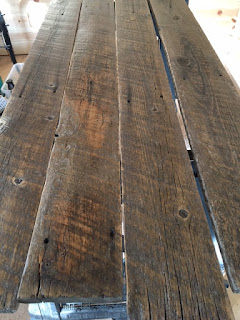 Since they were rough cut boards and had been in the elements for decades the edges were anything but straight. They were both warped from side to side and cupped in the center. If we wanted them to fit tightly side by side on the wall we needed straight edges. So for the next step I clamped an 8' level to each of the boards and ripped a straight edge on one side. Some boards were pretty good, while others were quite warped and required more to be taken off to get a straight edge. 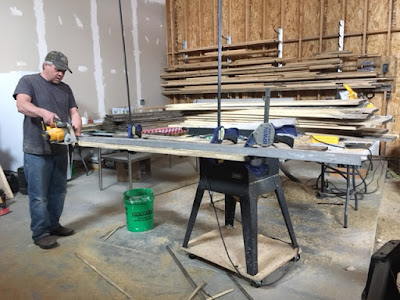 Once I had a straight edge on one side of each board I could run them through the table saw cutting them to a consistent width and giving the other side a straight edge. We now had finished boards that were the same widths and had straight edges on both sides!
Done? Nope, if we wanted them to lay flat on the wall and butt up end to end we needed to take the cupping out of the boards. This meant running them through a planer to get them to a consistent width and make the back side totally flat. There were varying width of boards so some of them we had to run through 5-6 times taking them down 1/64 of an inch each time. 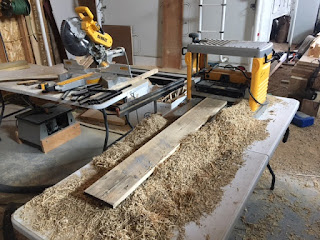 Now we had boards that were ready to put up on the wall! But even with all that work, not all the boards butted up tightly side to side and end to end so we painted the wall black so if there was any gaps you would not see the white wall behind the boards. 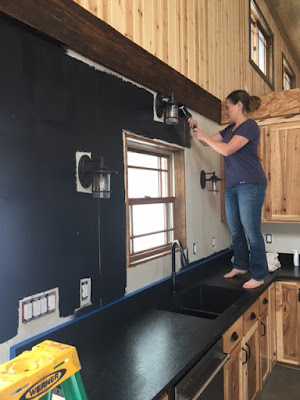 Since this project was an afterthought we did not put any nailers up so we ended up putting construction adhesive on each board when we put them up and used 2" finish nails anywhere we could hit solid wood behind the sheetrock. Each board had to be hand picked for each spot as we wanted them to fit as tightly as possible. Barb also stained the ends and sides of each board in case any tiny edges were exposed as we put them up. Board by board we worked our way across the wall. 3 days later we finally reached the other side! 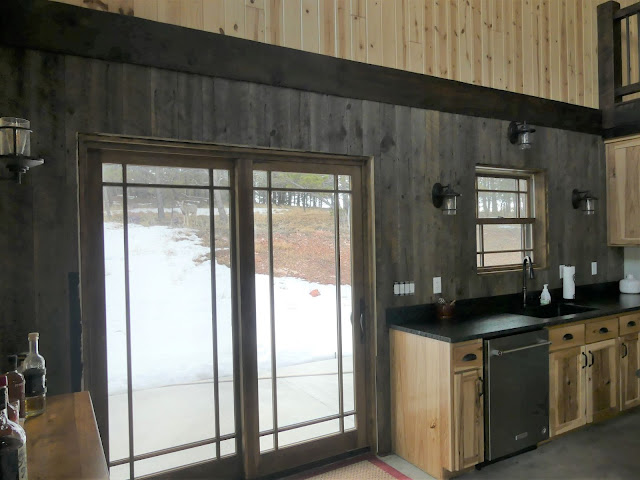 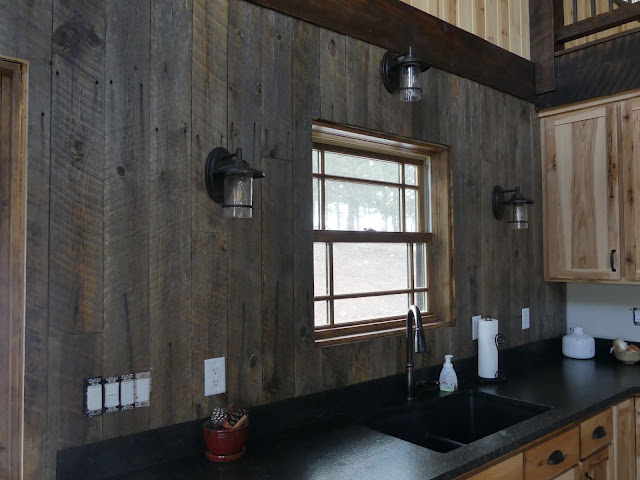 This look may not be for everyone but we love it! The aging and old nail holes of the board has a lot of character and really adds to the overall look of the wall.
Other accomplishments include getting the rest of the railing and trim boards up.... 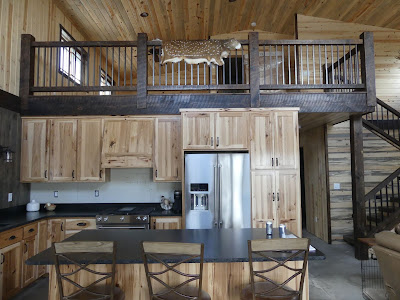 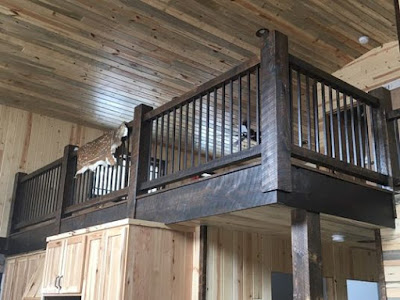 And no, that is not a fawn hide on the railing, that is an Axis deer I got while visiting our dear/deer friends Red and Pam in Texas a few years ago. You may have noticed another big difference in that picture from the one I posted last week....We got our fridge! Yes, after ordering it 6 months ago it finally arrived! That was the last appliance we were waiting for.
Those were our only house projects we did this week. We did clean the garage some more. We had stored all of our leftover steel roofing under the camper and we had to move it, getting ready for our upcoming adventures!
Barb has been busy getting ready for the arrival of the new puppy. Amazon packages seem to be arriving daily and the breeder sends pictures and videos almost daily. Here is the latest video....
If you listened to the video carefully, you heard the breeder calling the puppy Zoey. That is because we decided to change her name from Lyra to Zoey. Three more weeks and she will be in our house!
With the coming of spring, the turkeys are getting ready for their mating season which is just a few weeks ago. A few days ago we were greeted with this when we walked out of the bedroom to start our day! Turkey season for archery opens on April 3rd, my guess is that they are just taunting us and we will not see a feather come the first weekend of April. 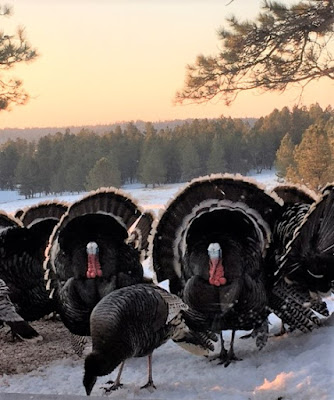 The highlight of our week however was when we took a day to get out trout fishing at our favorite creek! 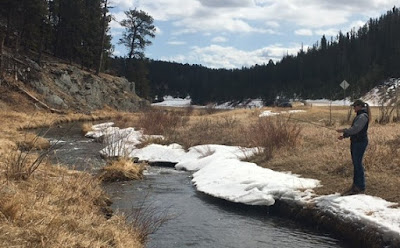 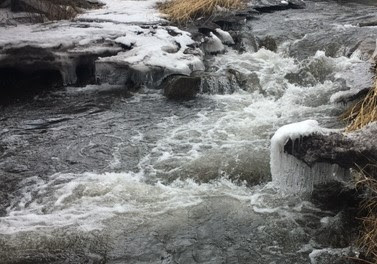 We caught a couple of small trout but overall they were not very cooperative. I don't think we have been there since the spring of '19 when we fished there with the McCormack's when the men out fished the women in both quantity and size by like 3:1. At least that is how I remember it!

Posted by Jim and Barb's RV Adventure at 4:29 PM