Ah, the good old days, living life without a care in the world. Having someone feed you, cloth you, clean up after you, make all your decisions for the day…. That is the life of Zoey. That epiphany dawned on me the other day as I watched Zoey in the grass chasing a butterfly without a care in the world. I guess the more I think about it my life is not that dissimilar to Zoey except for the carefree part. I have even been known to get distracted and chase an imaginary butterfly (and squirrels) or two. If I were ever to lose Barb I would be in a world of hurt. Sadly, I am losing Barb in a Monday as she takes both of the dogs with her back to South Dakota.

Speaking of Barb, she made one comment this week that really got me thinking. Back in our working days we had goal dates of when we were going to retire and Barb hit one of those goal dates last month when she turned 62. We used to get these retirement statements from work show how much our pensions would be worth at 55, 62, and so on. The longer you wait, the more you get. Barb’s was quite a bit more if she waited until 62 but she retired at 55 and never regretted it. The thought of working the last 7 years is almost unfathomable. Although we enjoyed our jobs and the people we worked with, the adventures, time together and people we met are worth more than the extra money we would have made.

In a way, I envy the people who are hitting the road this year. When I read blogs or talk to people who are just starting their adventures I see the excitement and sense of wonderment in their eyes and actions. Although we still love traveling and look forward to our upcoming adventures, that initial excitement of going on the road has been long gone. We feel the same way with people who are now building a house, we would just get giddy when we turn the corner to go onto our road to return to our new property thinking about and then actually building our house. That giddy feeling is gone and has been replaced with a warm comforting feeling knowing we are home.

So what if we had waited the 7 more years and left the road amid the pandemic? The world of traveling and the world itself has changed a lot in that time. We certainly would not have met the friends we met, our property would have long been sold and the prices of land out there have almost doubled so we could have never afforded the property we got. Plus, there are thousands of new RV’ers competing for campsites and crowding tourist attractions.

No, we have absolutely no regrets retiring early and leaving that extra money behind. My advice to anyone out there is to do the analysis and figure out how to retire as early as possible and enjoy life.

Zoey continues to entertain us with her antics everyday. Discovering her new world, making friends and yes, chasing the occasional butterfly. Here are a few pictures of her life this week..... 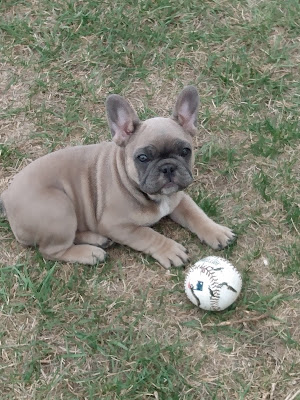 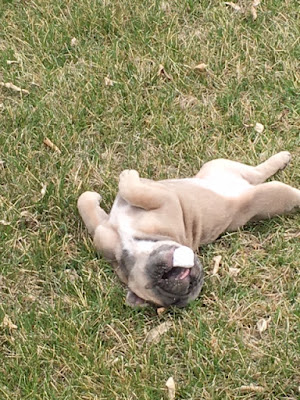 She went for her first 4 wheeler ride! 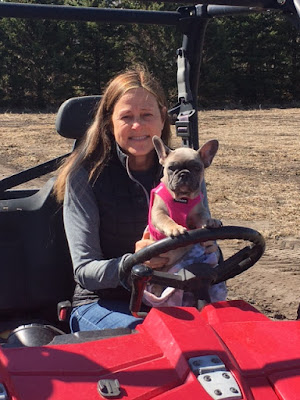 Doesn't Dakota look thrilled to be sharing her bed with Zoey?!?!? 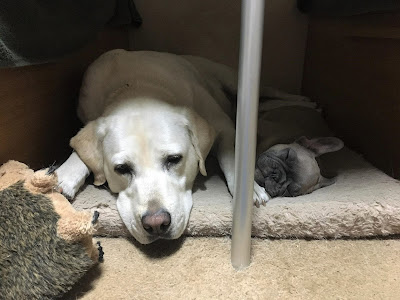 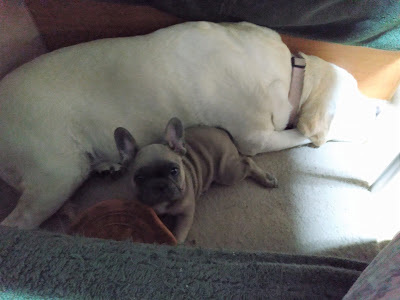 She met her first cat friend.... 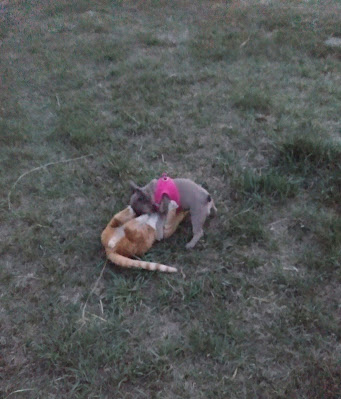 The cat (Cheetah) love playing with her and will even somehow get between the cab of the truck and the camper window so they can play through the glass. 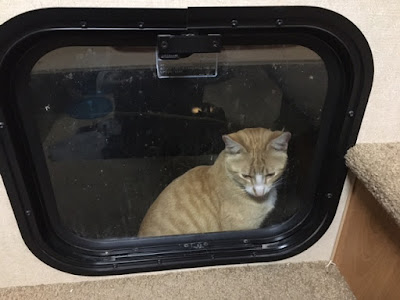 We put her bed in her crate and now she sleeps in there (during the day) with the door open. I even left her alone in the camper while I was working outside for 30 minutes. When I came back she was sound asleep in her crate. 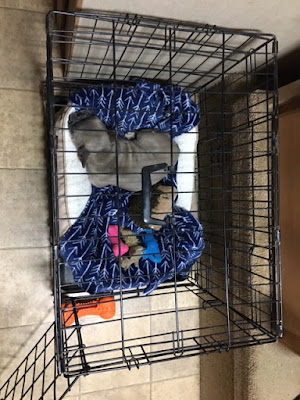 Zoey continues to annoy the hell out of Dakota but Dakota is putting up with it more and more. Dakota has resigned herself to the world of her life with a puppy and now lets Zoey pull on her lips and ears giving an occasional growl when she pulls too hard.

Here are a couple of short videos of Zoey annoying Dakota, one with her playing with a ball and one of Dakota taking Zoey for a walk.

With a little over 2,500 acres in, we are a little over 1/2 way done with planting. The peas are in, the wheat is in and we have now switched to Canola which there is 1,100 acres of. Chris is planting things a little deeper so when the seed germinates it will sit dormant under the soil until the next rain, when it will sprout above the surface and have a better chance of growing in these drought conditions. At least that is the hope!

I got out and rolled the 220 acres peas the other day. I equated this to dragging a 51' kitchen rolling pin behind the tractor to compact the soil, capturing what moisture there is and push all the rocks back down into the ground.

Other than that I have been busy hauling seed and fertilizer then helping Chris fill the drill cart.

We have been working on taking down another old fence in our spare time, this one is again about 1/2 mile long and is a combination of barbed wire and woven wire. The barbed wire I just need to roll up with the fence wheel after detaching it from the posts. 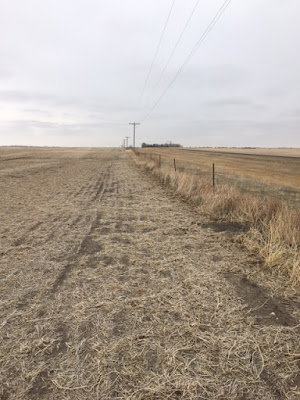 The woven wire we need to roll up by hand.
Our adventures for the week included me going to Bismarck to get a bell with Bob. This one was 28" and was an absolute pig to move. Bob and I could carry it about 5' before we had to rest so it took a while to get it to a concrete area where we could put it on a cart and roll it to the truck
But once we got it to the truck we had to lift it into the bed! 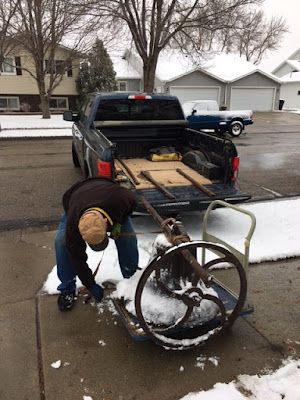 Do you ever wonder how many people you can fit into an 11 1/2 foot camper? Well, we know it is at least 7 (and 2 dogs) as we all gathered in there the other day before going to supper in Minot.

Posted by Jim and Barb's RV Adventure at 3:07 PM