You Know you Live in the Country When…..

As some of you may recall, I am the reigning employee of the year here at Finken Farms. Such an honor comes with a lot of perks that I am taking full advantage of. 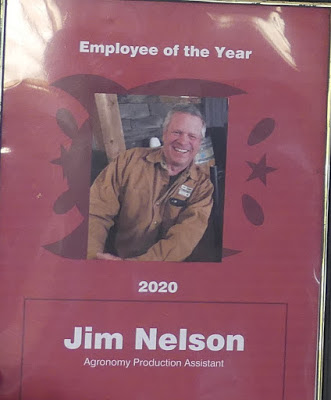 For example, every once in a while Bob will buy donuts for everyone and they will let me have 4th choice after Bob, Chris and Dylan! And sometimes they let me ride in the cab of the truck when we go out to the field! Well, that is if Dylan’s dog Nova is not already in the back seat. Yup, being reigning employee of the year certainly has its perks!

Farm life continues this week with lots of field work. Most of my week was spent rolling and moving trucks around. Rolling gives you a lot of time to look around, contemplate life and listen to the radio. With guidance turned on in the tractor I just need to set up a course, get the tractor up to speed and push the guidance button. I can then take my hands off the wheel until I get to the end of the field where I turn around and do it all over again, and again, and again, and again……If I had to guess, I would say about 16+ hours of rolling this week. 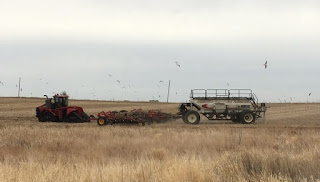 With all this time to look around I was able to make a few observations about living in the country compared to say, the city or even the suburbs. So I added to my ongoing list of items that…. You Know you Live in the Country When….

A lot of those actually happened this week. I just don’t know how people can live in the city. And city folk don’t know how we can live in the country. Thank goodness we are not all alike! In fact, Zoey (I actually started to write Daisy and had to backspace) had her puppy checkup, her second set of shots and a nail trim this week. Total cost: $38. Tell me you can find that in the city! She gained a little over 3#’s since we picked her up.

She and Dakota have totally bonded now and Dakota is even playing with her, not just dragging her around!

Zoey also met another friend this week when Cheryl brought over her Rottweiler puppy Liesl. Those two played and ran around the house like crazy!

On a totally different subject Barb and I have been looking at ways to save our blogs in a format that will ensure we have them should blogger ever disappear. I had started copying them and saving them as pdf’s but that is cumbersome and I really do not like the look of it. Plus, you still had to go onto the computer if you physically want to look them up. I like the idea of saving them for two reasons: one is it serves as memories and a journal for us to remember things and two in the hopes that someday our grandkids will read them and get a kick out of what the grand-folks did back in the day. Well, Barb stumbled on a service the other day call Blog2print and I was wondering if anyone else has tried it. It is a service that converts your blogs into a book format that can either be saved electronically or in an actual book (or both) with minimal work. We have played with it and think we are going to try it in the physical book form to see how we like it. Not to sell, or even give away, just one copy for ourselves to page through when we are old and gray(er). We are starting with one year to see how we like it and will pass on our thoughts.

We had some guests here at the farm this week! Bob and Sue (Chris’ parents) came up for a few days and Bob’s brother Dan and his wife Jeanie who have a place about an hour away stopped by for a visit as well. We took an afternoon off and cooked some burgers on the grill. We only get to see them a time or three a year so it was good to see everyone and visit.

Barb was busy herself back at home. We had carpet installed in the upstairs bedroom and loft area. It is nice to finally have some type of flooring in other than plywood and concrete! 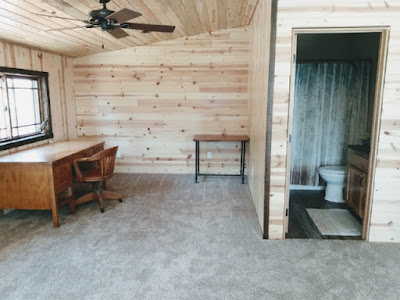 She also got together with Kevin, Cheryl, Dan and Bonnie to celebrate Dan’s birthday! They of course went to the Pringle Bar where Dan had to get his picture taken with the tiara and scepter. Now everyone has had their turn this year with their birthdays at the Pringle Bar…although Barb’s was probably the funniest and we were not even there! 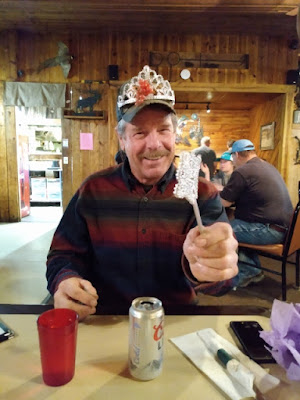 So that is this week’s update from the country where the living seems so much more enjoyable and simpler. Unless, they put in a roundabout…. Then all hell breaks loose! Our friend Greg shared this on Facebook and I just had to share it!

Oh wait, one last late addition, I got word late today that they could not plant anymore until they get some moisture which does not show up in the 10 day forecast, so this farm boy is headed south tomorrow morning! Thanks Bob, DeAnne, Chris, Holly and Dylan for everything, see you in the fall!

Posted by Jim and Barb's RV Adventure at 6:47 PM