I am going to date myself. When I wrote this title the first thing I thought of were The Monkees. But this title has nothing to do with the 1984 classic (correction,  apparently it was 1966!).

So, what am I a believer in? Well, after 6 weeks of knee pain I found a remedy that not only relieved the pain, but I think it also fixed it altogether. I was working on the porch roof the other day on a ladder when I shifted my leg sideways and I had excruciating pain in my knee. I literally could not move. Of course, I was home alone (Barb was still in AZ) with no one to hear my cries of pain. It took me 10 minutes to get off the ladder as I had to build up the courage to bend my knee and fight through the pain to get down and hobble back to the couch. Usually, I can fight through the pain but this was a whole new level.

I looked through the medicine cabinet for something a little stronger than the ibuprofen I usually take but could not find anything. So I texted Cheryl who recently had knee surgery and knows first-hand the best thing to do for knee pain. She said that CBD did wonders for reducing the swelling which in turn relieved the pain. Now, I am not a big CBD guy but it hurt so bad I would have drank bleach had someone suggested it, and I knew Barb had some CBD somewhere in a drawer so I tried a couple. 45 minutes later I am walking around like nothing happened! No buzz, no drowsiness, no nothing and no pain! After that I took two every day for 3 days and I have not had any knee pain since. I even went on a hike the other day! So, yes, I am now a believer.

As cool as that was, what happened on last Sunday was even cooler. No, I did not get TBO, but Forrest, Somer and Lily arrived for a 9-day visit!

We did a variety of things throughout the week including the aforementioned hike. We were going to do a Needles Highway hike but it was closed due to snow so instead we did a hike around Sylvan Lake in Custer State Park.

The lake was frozen which really gave it a unique look. 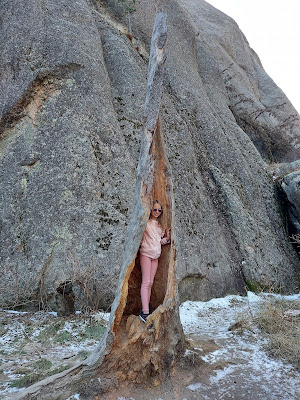 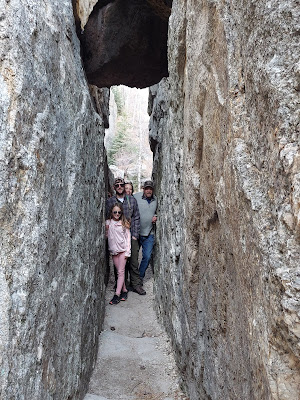 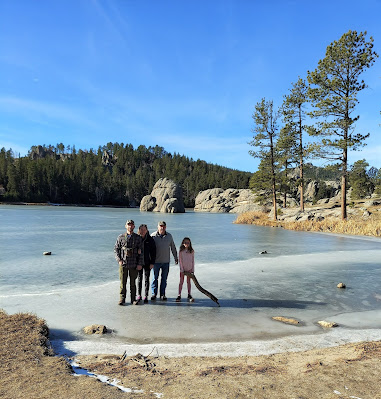 One of Barb's favorite pastimes is to explore the local auctions sites for treasures she just cannot live without. Well this past week she won not one, but two accordions! This now brings us to three of beautiful "compact" instruments. Barb has never played one, but she loves them and wants to learn and as a bonus, Zoey absolutely goes through the roof anytime she tries to play them! 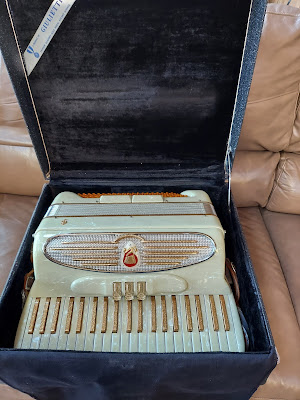 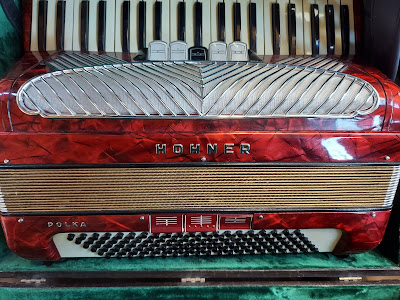 Wednesday night was of course burger night. Our table was a little bigger with not only Forrest, Somer and Lily but our neighbors Jim and Carmen joined us as well. We were just finishing up dinner when this woman approaches Barb and said, "You look familiar". They started talking and it ends up Barb had sold them a horse over 20 years ago when we lived in Wisconsin! The weird thing about it is that the woman who recognized Barb could not have been over 30 so she would have been 10 or so when her family bought the horse. What are the odds of a 10-year-old recognizing Barb 20 years later?

For those of you who know us from way back then, the horse was Forrest's pony Shamrock. Ends up she married a Pringle local that she met on the circuit when she was 15 and they are now married and live in Hot Springs. Crazy coincidence.

As I was looking for a picture of Shamrock I ran across this picture of Barb and just have to include it.

Thanksgiving was Thursday, and we have so much to be thankful for. It was a very special day being able to share it with Forrest, Somer and Lily.  It is not always easy disrupting your life, not to mention the time and money it takes to travel. We really appreciate them taking the time to come and visit us!

Once it warmed up (a little) I fired up the tractor and we went for a tractor ride down the road and around the property. 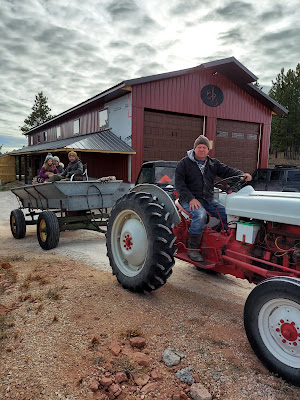 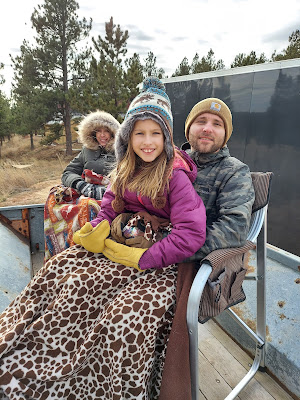 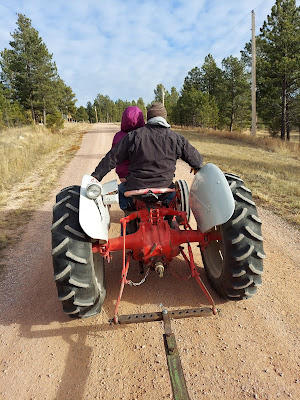 The next day they went on a train adventure in Hill City! It was a special Christmas Express, so they got to talk to Santa while on the train 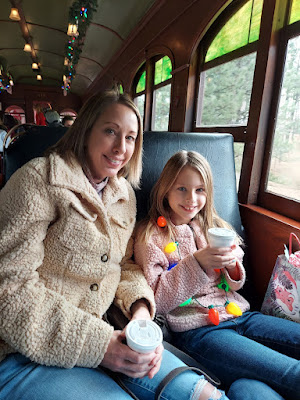 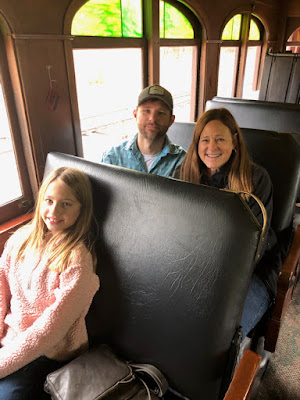 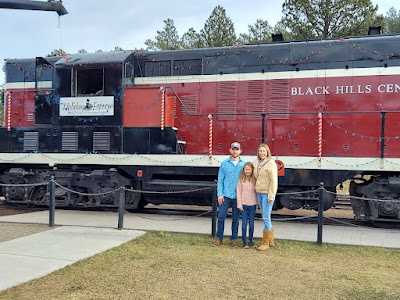 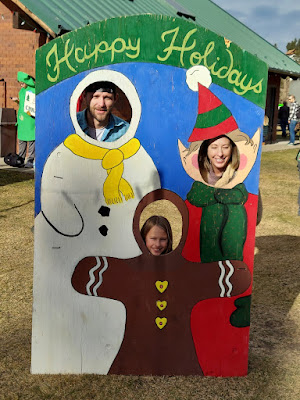 While they were enjoying the train ride, I had special visitors myself back home when Farmer Bob and DeAnne stopped by on the way home from Thanksgiving at their daughter's place in Denver. We visited for an hour or so and they continued on their way back home to North Dakota. 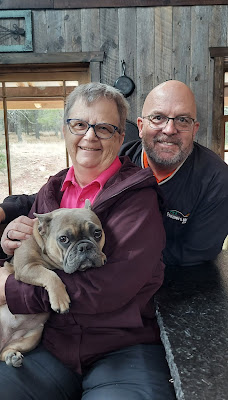 When the "kids" got back from their adventure, they had a Christmas tree with them. Lily and Barb spent a couple hours decorating it. It was a special moment watching those two decorate the tree, we have never had any of our grandchildren around this time of year and it was very special to us. 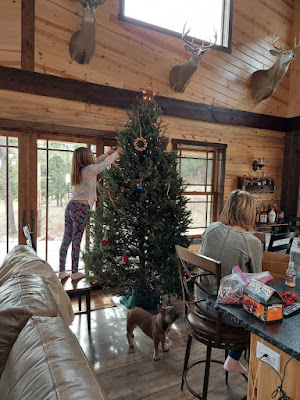 The hunt for TBO continues. I have been switching it up between my ground blinds and tree stands spending hours on my quest. I am seeing lots of deer and seeing some great sights. Here is the view from one of my tree stands. This one is about 20' up in a big pine.

I put together a short video of some of the deer I saw last week. The rut was going on so every buck in the area was searching for hot does... Dino, the last clip in the video is for you as I thought of you when I put this together.....
As cool as all those experiences are, there was one experience that I have never had in my life when I saw something moving off in the distance. After looking through my binoculars I saw it was a bobcat! I was able to try and take a picture with my phone through the binoculars and if you zoom in on the picture below you can see the bobcat. That was a first for me!

Overall, it was a great 10 days, and it went way too fast. We appreciate them taking time out of their busy lives to come out and visit us create memories for all of us that we will never forget!
Posted by Jim and Barb's RV Adventure at 5:02 PM