What a Strange, Strange World we Live in!

Just when you were thankful that 2020 was over and the world could not get any more bizarre an event happened this past week that left me staring at the TV in utter disbelief. If you are like me, you were probably shaking your head thinking “What a strange, strange world we live in!”  Most of you know of the event I am speaking of…. The Brown’s making the playoffs!?!?! With the longest playoff drought of all the teams, the Browns had not made the playoffs since 2002. What is this world coming to?!?!?! What other weirdness will 2021 bring?

Let’s see, what else weird happened this week….. Oh! We got our appliances! Well, most of them. We had ordered them in mid-September, we were hoping to take delivery by Thanksgiving, then Christmas but delay after delay kept pushing out the delivery date. Then we finally received a call saying that the stove and dishwasher were in. Sadly, the fridge was still delayed. Apparently a lot of the refrigerator companies are making ventilators in addition to refrigerators thus the delay. But we will take what we can get! 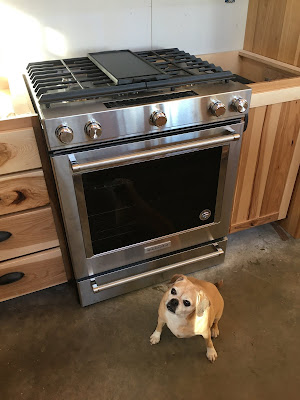 Also this week I worked on sheetrocking the main bath while Barb worked on the T&G in the hallway. Everything was going well for me. Sheetrock was up on the ceiling and vanity wall. I got it taped, mudded and was ready to slide the new vanity in place. When I went to cut the holes in the back of the vanity for the drain and water lines I discovered the waterlines coming out of the wall were going to hit the vanity right where the drawers are! Ugh! So I proceeded to tear out that piece of sheetrock on the wall, move the waterlines, put the sheetrock back up, tape and mud. There was a waste of a day!

Then I cut the holes in the back of the vanity and slide it into place. Unfortunately it does not fit perfectly and requires some scribing which is above my paygrade so I will have to wait until Kevin comes over next time.
The hallway is really coming together but we were down to our last few T&G boards which were the worst of the worst. Barb got the east hall wall done then went to work on the west wall. The last dozen boards we had were so bent and twisted it just was not going to happen. She fought to make them work but in the end we tore them out and will have to wait until we buy a few more boards.
Then we went to work on the stairs. After months of staring through the studs into the area under the stairs it was time to cover them up. Barb tackled this project pretty much by herself and it looks great! The next step is to stain and varnish the stair treads and put everything back together. 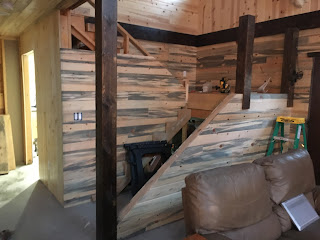 Two more big news items for the week. I don’t know which one is bigger but I will start with the internet. After years of dealing with our Mifi with supposedly “unlimited” gigs we have upgraded! Gone are the days where we have to worry about hitting our 15 gig high speed limit. I know many of you have felt the pain of going over your limit and dealing with being throttled down. We now have fiberoptics run right into the house and could not be happier! They ran a temporary line over ¼ mile long along our fenceline. They will bury it in the spring when the ground thaws.

The other big news is that Barb applied for Social Security! You can start applying a couple of months prior to your 62nd birthday and we wanted to be right on it. The other thing we talked about was getting a new Jeep when she started getting her SS. Although her birthday is still a couple months away, we thought we would just go to the dealership and start looking to narrow down what model, color, options we wanted so when we were ready to buy we would know what we wanted. We knew we wanted the 3.6 liter engine with a 6 speed manual. We thought we wanted a Wrangler but were open to looking at other models and we wanted something with less than 30,000 miles on it, so off to the dealership we went! 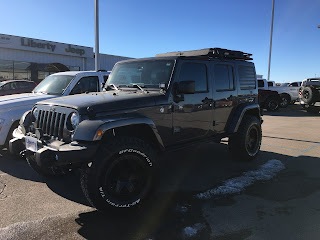 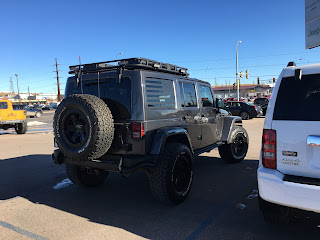 It has been a few days and the expected buyer’s remorse has not set in so we must have made the right decision. It had the right engine, was a 6 speed manual, we loved the color, had only 17,000 miles on it and it was in our price range! It was like it was meant to be!

Speaking of Barb, she did it again this week. Although this time instead of injuring her hand, it was her face. Of course it was my fault as I had bought some 12' mesh panels which were in the back of the truck. Being 12', they extended 4' beyond the bed of the truck and you guessed it, she walked around the back of the truck and walked right into them slicing open the bridge of her nose. I just so happened that we were at the Jeep dealer when it happened so she was in the truck quite a bit trying to get it to stop bleeding. The next day (and the next several) she also had a black eye. For some strange reason she would not let me take a picture of it!

Life is not all peaches and cream though as our little Daisy has been going downhill fast the past few weeks. For those of you who didn’t know, she was diagnosed with cancer and was given 8 weeks to live. We took her to a total of 3 vets to see if there is anything we could do and all three said it was an aggressive mass blocking her colon and there was nothing we could do eventually the mass would block her up entirely and she would not be able to go to the bathroom. So we gave her stool softener to make things easier for her. That was February of 2019 and she has powered through for almost two years! We have her checked every few months and much to the astonishment of the vets, the tumor has not grown. But last week we noticed a significant change in her personality; withdrawn, not eating as much and having accidents in the house. So Barb took her to the vet. The tumor has still not grown but they did discover a softball sized mass in her stomach. Barb brought her home and she just laid around that day, would not walk or lift her head, still would not eat and would try but could not go to the bathroom. That was Friday, January 1st. We made the decision that when the vet opened up the next day we would take her down there. Well, she must have heard us talking as when we woke up the next morning she was jumping up and down wanted her breakfast! It has been just over a week and she is rallying once again! We upped her stool softner and everything seems to be going well. You just don't want to be behind her when she sneezes! It has been just over a week and she is back to her “normal” self. We know the end is near, it could be a week, it could be a month, heck, it could be a little longer than that but are happy that we have been blessed with an additional 2 years we did not think we would get….

Posted by Jim and Barb's RV Adventure at 7:19 AM