So there we were. Barb and I were enjoying the peace and quiet of the afternoon out on the porch. A whitetail buck deer munch’in on clover, redtail hawk sitting on a limb, chubby ole groundhog, barking French Bulldog….. truly a Pringleland Delight…. Does it get any better than this? (Lyrics stolen from Alabama…. Well, kinda)

All of a sudden there was a loud bang, a puff of black smoke and a whoop coming from the end of our driveway. “Did you lock the gate?” I asked Barb. “But they are hundreds of miles away, we should be safe” she said. Next thing we knew a rusty old Dodge truck towing a broken down 5th wheel appears over the horizon…. on our driveway!

“Code Olivieri, code Olivieri!” I yelled and sprung into action. Having practiced this drill monthly since 2014 we knew exactly what to do. I ran to the beer fridge and hid all the good beer, Barb ran to the kitchen fridge, hid all the steaks and pulled out at package of hot dogs. “How did they find us?” she screamed. “I don’t know, hide all the valuables!”

As they pulled up Barb and I each said a short prayer and a downed a shot of Fireball. By the time they got out of their truck we had hidden everything that needed hiding. Lisa leapt out of the truck, jumped up and wrapped both her legs around my waist. She gave me a kiss on my neck that I am pretty sure left a hickey that will take a week to fade. She then went over to Barb and gave her a kiss on the lips. "Do you want your gum back?" Barb said. "No, you keep it, I found it under a picnic table yesterday",  Lisa replied. Meanwhile, Dino opened his truck door and a pile of beer cans fell to the ground. He walked right by us, into the garage, opened the beer fridge and said “You have my favorite kind of beer!” “Cold?” I replied. “Nope, free!” he said as he popped the top on one and put one in each pocket.

“What an unexpected surprise” Barb said, “How long are you staying?”. “That depends, how much beer you got?” was Dino’s reply.

So started, what we now refer to “Black Tuesday”. They were here, we might as well try and make the best of it. 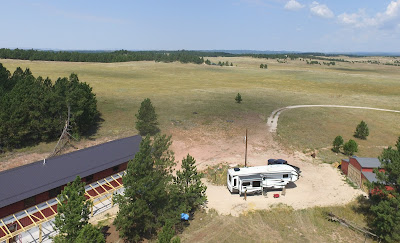 Once they were settled in we sat on the porch watch Dino drink beer after beer and got caught up. We had not seen them since October of last year so we had lots of catching up! They brought Moose in for a playdate and Zoey wasted no time investigating this new creature!

The next day was build your own crepe breakfast followed by a Ranger ride through the National Forest. 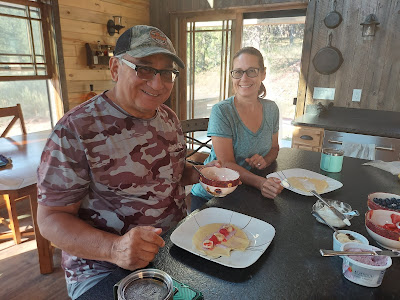 Barb and Lisa jumped into the new Ranger while Dino and I were in the other one. We put on about 20 miles weaving in and out of the woods and valleys of the National Forest. 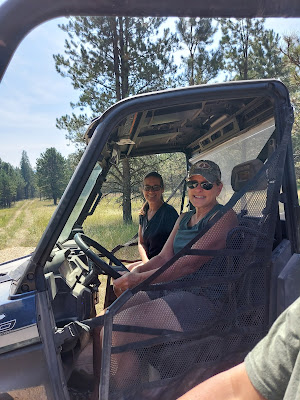 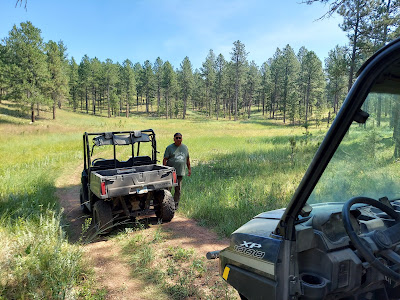 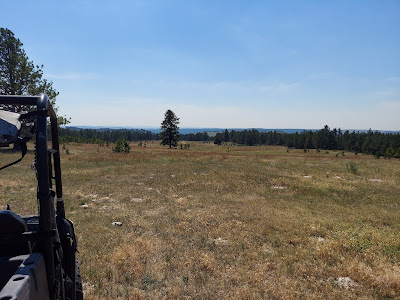 Being Wednesday, we knew what we were having for dinner....burgers at the Pringle bar! 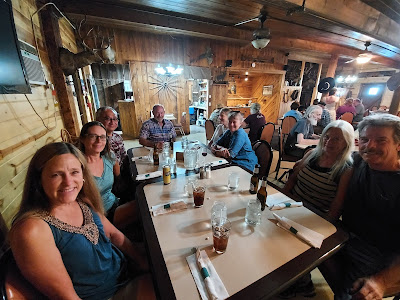 Then Dan and Bonnie came back to our place for a game of Cards Against Humanity. We laughed until the sunset, then laughed some more! 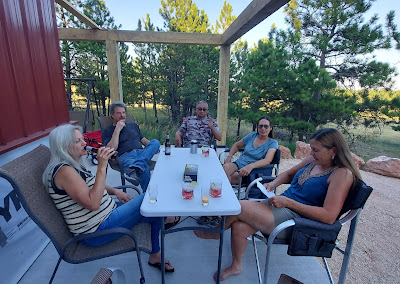 Poor Zoey was left inside while we were outside playing. She thought that was the meanest thing in the world and stared out the window and let us know it! 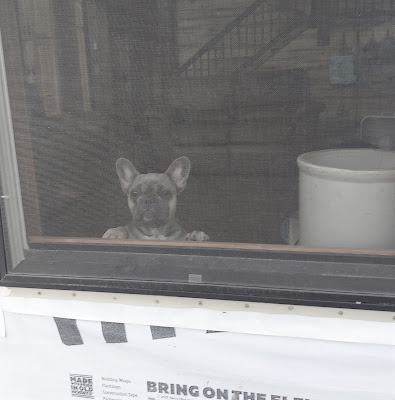 Thursday was set to be a play day. Dino and I shot out bows while the girls went for a walk. 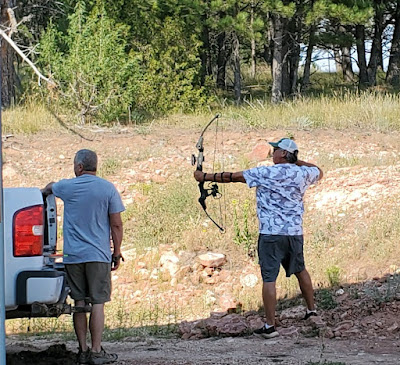 We did have an archery competition of sorts. We were sitting there and Dino said "How far do you think it is to that tree in the field?" A quick check with the range finder told us it was 244 yards. "Let's each put up $5 and whoever gets the closest wins" he said. "Will you have enough gas money to leave?" I replied. "Only if you run out of beer" he said.
So using our best medieval archery stances we launched our arrows toward the tree..... All or our arrows landed within 10 yards or so of each other with mine landing just a few feet closer to the tree! 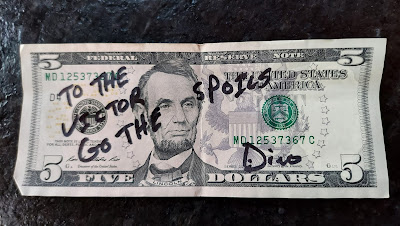 Then it was time to head off to Hill City. This week is the main week for the Sturgis Motorcycle Rally. As anyone who lives around here knows, it is not just at Sturgis but throughout the whole Black Hills. So we were going to drive through Custer and Hill City to see the festivities.
As we were getting ready I hear Lisa in the garage scream, "Oh my God, it is so big!". Curious, I went to the garage to see what would amaze her like this. I knew for a fact it had nothing to do with Dino.....and I was right. I went out there and she points at a snake making its way up the windshield of the Jeep! 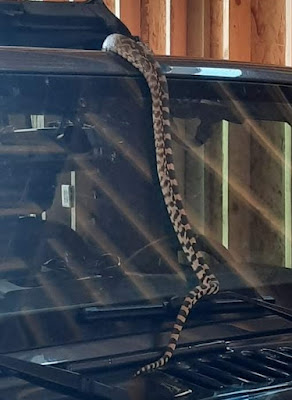 The top was open and it curled itself up on the sun visor on the drivers side. 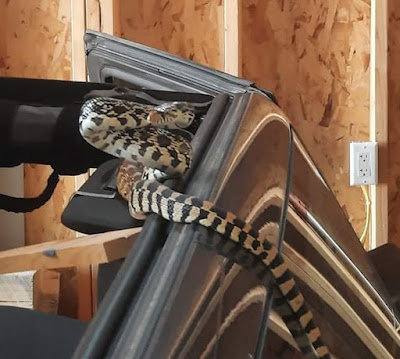 I am not afraid of snakes like I am afraid of spiders but I am not a fan of them either. So Dino and each grabbed a long piece of wood and  extricated it from the vehicle. This thing was over 4' long, maybe closer to 5'!
Crisis over, we all jumped in the Jeep and headed off to town. Could you imagine if that thing would have crawled out from under the seat while we were driving!?!?!? Both Custer and Hill City were packed with bikes. I think the average age of the bikers was well over 60 and everyone seemed to be having a good time. 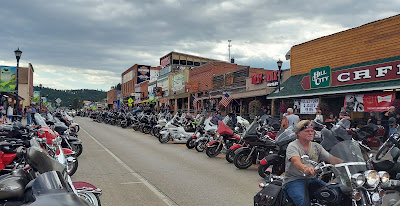 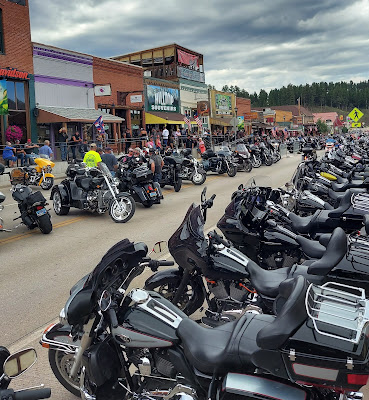 And no visit to Hill City is complete without stopping to see the worlds largest Smokey the Bear! 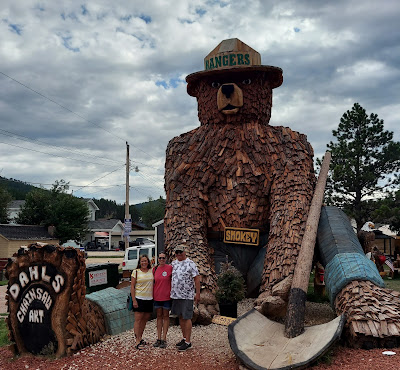 Friday, Barb and Lisa went to Rapid for a "girls day". Shopping, pedicures, lunch and even ice cream! Meanwhile Dino and I had a "guys day" with Kevin as we went to one of his job sites to help him set trusses on a garage he is building. I did not get any pictures as I was actually working hard but I am sure Dino took a few!
Many of you know I like to live a little on the edge. Well, Saturday I once again put my life at when I  when I let Dino operate the tractor and a chainsaw! 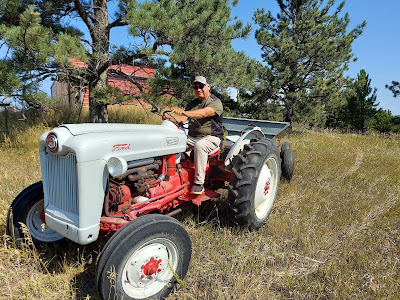 Many of you may recall the last time someone operated a chainsaw within arms reach of Dino.... Read this post in case you missed it. 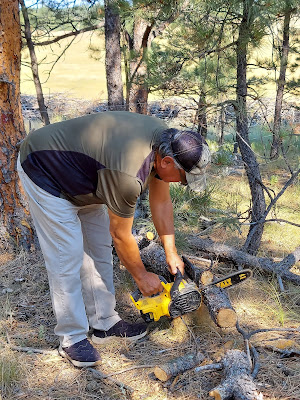 Not wanting a grossly disfigured leg like Lisa, I stayed outside of the reach of the chainsaw.
That afternoon we celebrated Zoey's 6 month birthday! 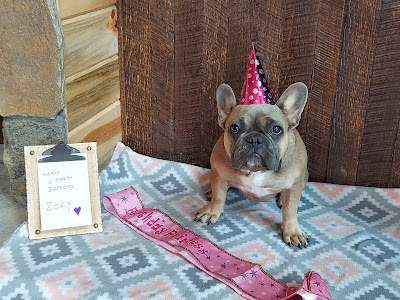 She even got a doggie cookie which she was supposed to share with Dakota but as soon as she got it she ran into the bedroom and under the bed! We eventually got her out but she had a vice grip on the cookie and had to extricate it from her mouth before we could give Dakota some. 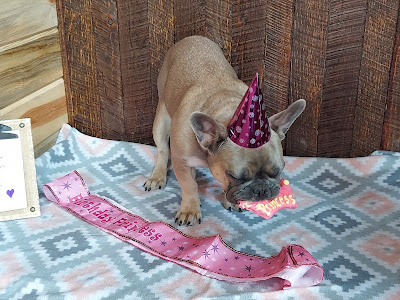 That night it was off to the movies in Hot Springs. They have a theatre that originally opened in 1929. The outside still has that old time movie theatre feel but the inside was very comfortable and has a huge screen. We each paid out $8 and went into watch. Jungle Cruise starring Dwyane Johnson "The Rock". We had not been to a movie since 2017 when we went to see Jumanji down in Parker Arizona with.... you guessed it.... Dino and Lisa. What did we see back then? Jumanji, starring Dwyane Johnson. The movie was good but Lisa was kind of disruptive as she kept repeating "Yes, yes, yes!" on and off throughout the entire movie. I don't know but I think she likes Dwayne Johnson....
All in all, it was a great...wait.... All in all, we endured and survived the week, on Sunday morning we ran out of beer and they finally hooked up their rig and headed off to their next undisclosed location. As their rig crested the hill and disappeared out of sight I turned and hugged Barb. I noticed a tear running down her cheek. "It's okay honey, we survived". "But they know where we live and might come back without notice" she said. To that I triumphantly responded "Not without notice, I planted a tracking device on their 5th wheel so we will have plenty of time to lock the gates and hide if they ever come back in the area". Wiping her face, she gave out a weak smile and said "Thank you, you are the smartest and handsomest and most wonderfulest man in the world. (I hear that a lot). We turned, and walked hand in hand back to the house. About 1/2 way back to the house a cold chill ran down my neck as I realized that they have two rigs.... God help us all.....
Posted by Jim and Barb's RV Adventure at 6:21 AM