Finken Factor; definition.....According to Wikipedia, The Finken Factor is an adage or epigram that typically states: When is close proximity of a Finken, one must consider the Finken Factor, the introduction of an unknown variable that will have an impact on whatever one is doing at a given time.

This "unknown variable" can be both positive and negative in nature, one just has to be ready for the introduction of the variable. Barb and I have experienced this factor many times over the years; trees jumping out in front of you while driving a tractor across a farm field, spontaneous mud holes appearing swallowing both tractors and equipment or fence lines suddenly reaching out and tangling themselves in various implements. It can also appear in a positive form as well such as always having a good time when in the presence of a Finken.

When Bob and DeAnne let us know they were thinking of coming down for a visit we were over the top excited to see them. Unlike our last visitors, this time we opened the gates, put up balloons and banners welcoming them. We even hired a marching band to welcome them through the gate! Unfortunately, Bob and DeAnne happened to arrive right when the marching band was off chasing the balloons and banners that were blown into the neighbors field by a strong wind so they did not see all the steps we went to in preparation for their arrival. Regardless, we were excited to see them!

They were scheduled to arrive early afternoon but were delayed by a flat tire on their trailer.

Luckily, they found a new one in Sundance and were able to get back on the road in an hour or so.
Once they got settled in we sat outside on the porch and enjoyed the afternoon. We had purchased a propane firepit the day before so we fired it up! 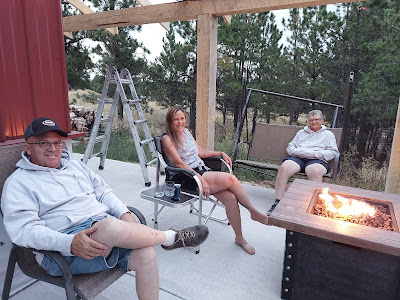 The next day Barb and DeAnne went down to Hot Springs where DeAnne played an 18 hole round of golf. 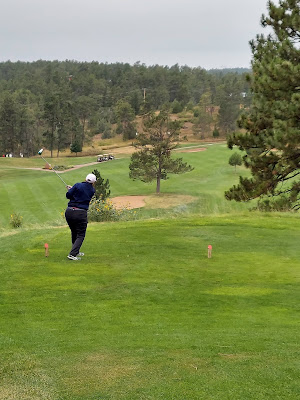 DeAnne said it was a fun and challenging course that ate a couple of her golf balls. It appears as though some of the residents on the course however, have lost their sense of humor! 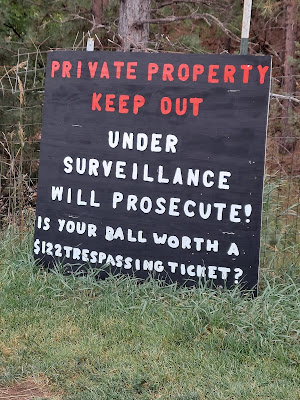 On one of the holes they saw this guy peeking through the grass watching the golfers go by.....

While they were golfing Bob and I unloaded a 1,000 gallon water tank he brought down for our future catchment system.

Then we  headed into Custer to do some antiquing. We stopped by several of the local stores where Bob found a couple of treasures. At lunchtime the girls met us at ..... The Purple Pie Place of course! 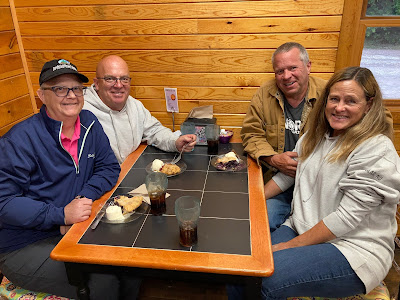 Early the next morning Bob and I got to experience what it is like to be Dino and sat at the island and  watched Kevin put our backsplash up. I will tell you right now, it is good to be Dino, he has quite the easy life! 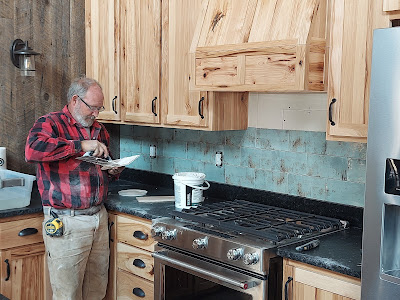 Barb has been going back and forth on this backsplash since the day she ordered the tile, even up until it was being installed. It is such a departure from her comfort zone when it comes to décor. 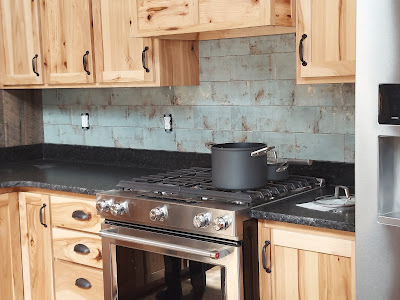 At first she did not like it but then she introduced the same color in other spots in the kitchen and it really tied everything together.

Once we got done watching Kevin working (It was exhausting), we headed off in our UTV's on a trail ride. We put on a total 63 miles and saw a lot of beautiful country. 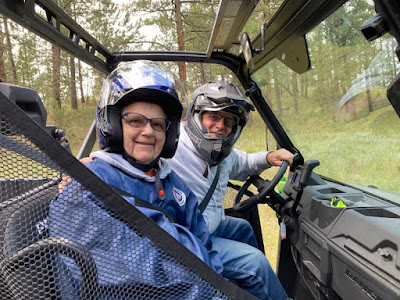 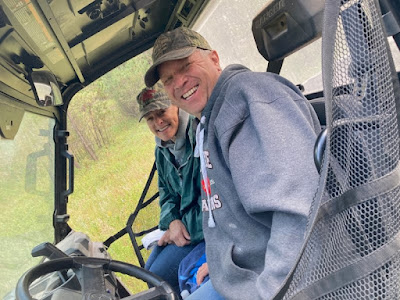 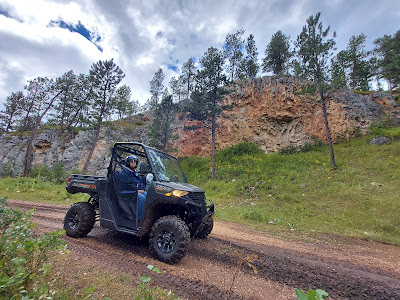 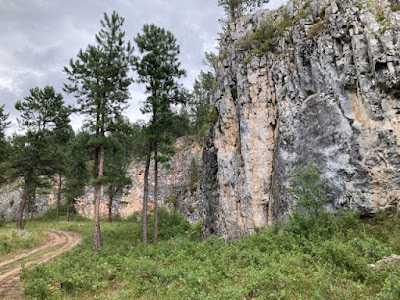 When we got back we were surprised and happy to see not only the backsplash done but also the floor in the walk in shower! 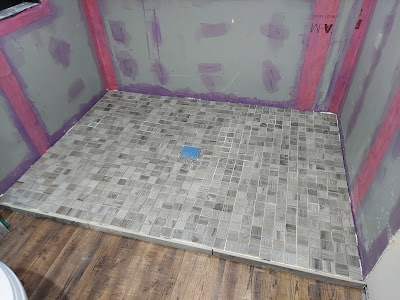 That evening Zoey modeled her new lifejacket for everyone. She is outgrowing everything we have for her! She was not impressed and would not walk the runway to model her new outfit. 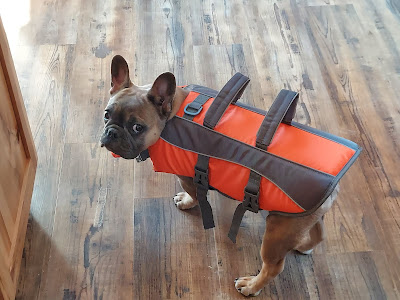 Then she showed off her TV watching skills when we were watching s show that featured a bear on a beach. 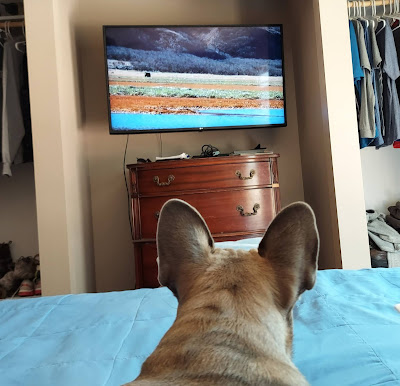 Sometimes we wonder where Zoey gets all her energy. Then we caught her drinking this bottle of Mountain Dew and knew exactly where it comes from! 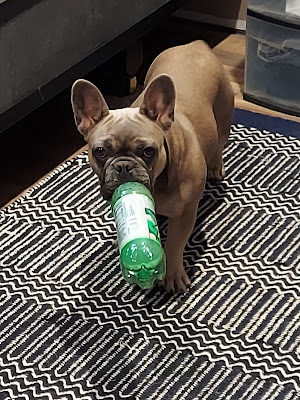 The next day,  we traded destinations as Barb and DeAnne headed to the Custer Golf Course to take in 9 holes while Bob and I went to Hot Springs. 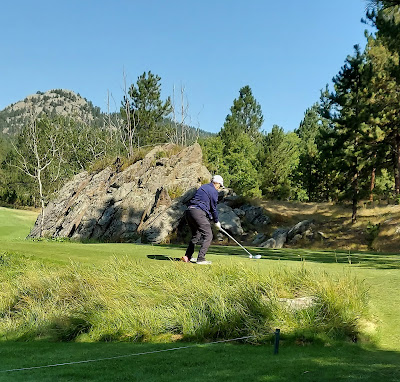 Bob and I visited the Pioneer Museum right in Hot Springs. One of the best museums I have been to in a long time right here in tiny ole Hot Springs....Who knew?!?

After lunch that day, we were off on the Rangers again to explore a new area! This time we went south and explored terrain that was more open. 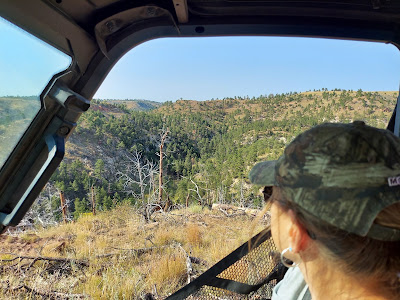 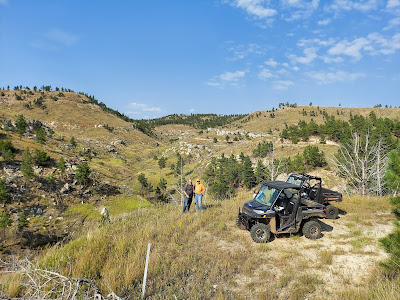 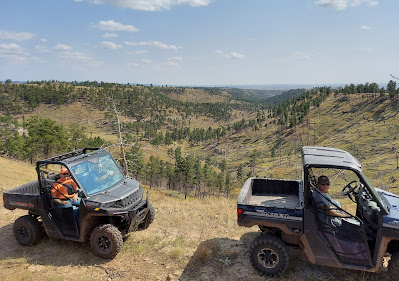 We put on 67 miles bringing the grand total miles on Bob and DeAnne's machine to somewhere around 160!
Sadly, the next day it was time for them to leave. Unlike our previous visitors, we really enjoyed Bob and DeAnne's company and were sad to see them leave. And instead of eating and drinking us out of house and home they actually left us gifts! 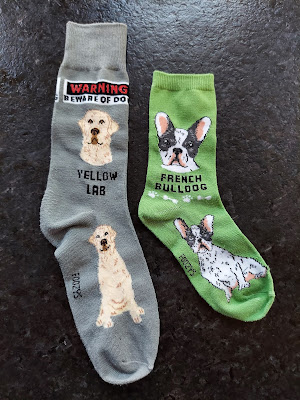 This time the Finken Factor was full of all positive experiences and good times!
After they left Barb and I got busy packing up for our next adventure.... camper, trailer, 4 wheeler, fishing gear, hunting gear clothing, kitchen stuff.....We created a whirlwind getting everything ready.
Once that was all done we jumped in the Jeep for a 5 hour road round trip to Nebraska to look at a new bow for Barb. We have been looking for a specific bow for over a month now; calling and emailing every dealer within a 4 hour radius. Nobody had one! Finally this place in Nebraska emailed us and said they got one in! Great! Just in the nick of time as we are leaving for our next adventure on Monday. We emailed them back and said we will be there on Sunday! They responded they were closed on Sunday. No! After trading a couple more emails they said they would meet us at the shop at 1:00 on Sunday so we could look at the bow. We headed down there hoping it was everything Barb wanted and it was not a wasted trip.... Barb is a happy camper! 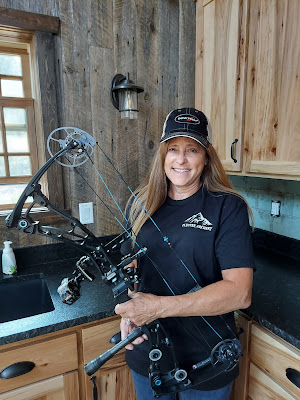 Tomorrow we leave bright and early for our next adventure! We are heading north, a little east for an overnight at an undisclosed location on our way to destination even further north. Let's hope they have plenty of beer, it is payback time!
Posted by Jim and Barb's RV Adventure at 7:29 PM