I know you have heard it before, but this week was just another of many examples of how I am the bestest of all the husbands. But more on that later.

Leaving The Farm, we headed east towards Fargo.  We had a 6-hour drive ahead of us to the Super-Secret Undisclosed location just inside the Minnesota border known as The Oliveri Compound. For those of you who have not been there, this compound is strategically located in a dense wooded area surrounding by swamps and marshes on two sides and a river on another. It was specifically designed to protect the occupants from the inevitable zombie apocalypse that will no doubt happen in the next few years.

We were warned in advance that in order to gain entrance within the fortified gates we would have to go through a rigorous security screening to ensure that we were not zombies in disguise trying to penetrate the compound. I was expecting some kind of blood test, eye exam or something of the like but instead immediately upon arrival we were given a Busch Light which we had to drink within 1 minute of our arrival. Now, we have met a lot of conspiracy theorists on our travels, but Dino took it to a whole new level. Apparently, Dino believes that this bottom shelf beer has some anti-zombie oxidants that sends them into a frenzy exposing the blood thirsty creatures for what they are. Who knew?!?!  Having passed that test we were allowed access to the grounds.  The other thing we did not know, but Dino informed us of very quickly, is that zombies will not attack anyone with a blood alcohol level over .15 so anyone on the premises has to maintain that minimum at all times.

Now, no pictures are allowed on the exterior of the grounds, but we were able to take a few inside. Dino and Lisa have two cats; Moose and Journey. Moose is quite friendly to two and four legged creatures. Journey on the other hand looks like she will rip your face off if you just look at her the wrong way! 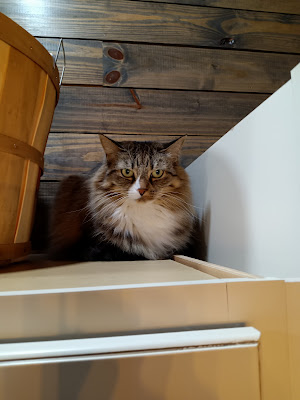 Meanwhile, Zoey and Moose reacquainted themselves with each other. Zoey chased Moose around like crazy, they only place she was safe was on her cat condo. 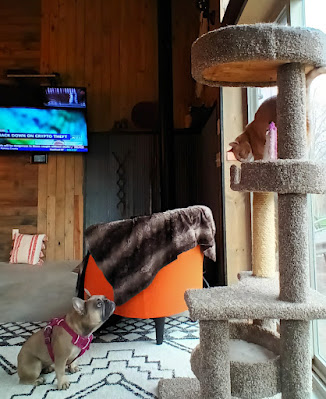 Yes Harry, another cute animal video! The next two days were a whirlwind as we worked hard to make sure our BAC stayed above that minimum level. Apparently, there is no maximum level as that was not discussed at all.

We went on several adventures during our stay. We are always looking for treasures on our travels so our first adventure was a stop at several antique stores in the area where I found these two treasures to add to my collection. 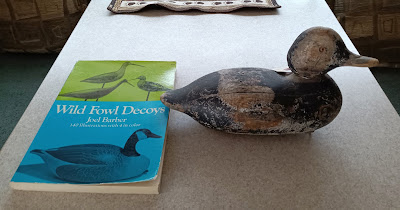 We were in the middle of one antique store when Lisa said “Oh oh” and pulled out little black pouch that looked like a medical kit. She pricked her finger and put a drop of blood on a tester of some sort. Barb and I were concerned, we had no idea that she was a diabetic. After testing her blood she urgently exclaimed “Oh my God!” and showed the results to Dino. After seeing the results Dino immediately grabbed Lisa’s arm and ran out of the building towards the truck. We had no idea what was going on and quickly followed.  We thought for sure she was having some sort of medical emergency and needed to be rushed to the hospital. Once in the truck Dino tore through the streets like a wild man telling Lisa “Hang in there, it will be alright”. We were shocked and confused as Dino raced right past the hospital and came to a screeching halt in front of another building, and he and Lisa ran in leaving the truck running and both doors open. Confused Barb and I followed behind and entered the building to find out it was one of the local breweries. Lisa was chugging a beer as we walked in and Dino turned to us and said “That was close, she was at a .10!” 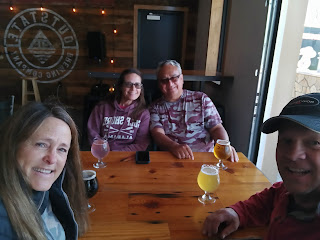 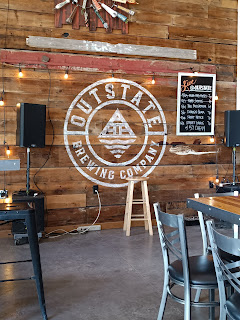 Well, rest assured we made sure that did not happen again during our stay! We hit 3 breweries during our stay (well, 4 but one was not open). One of which was a cider house that was actually very good!

All too soon, it was time for us to leave and continue on our journey. I had a special surprise in store for Barb today. Since we were at the farm during Mother’s Day and I was working, I was not able to get her anything so I wanted to make it up to her. Barb realized very quickly we were not taking the route on The Plan and asked me where we were going. I told her I had a special surprise for her today! She quickly said “Not today Honey, I have a headache”. I reassured her, telling her that this was a really special surprise as I secretly set our GPS to Walker, Minnesota and went on our way.
Once we arrived, I blindfolded Barb and led her into the store right up to this very special display. I removed the blindfold and shouted “Ta Da!” She was beyond words as she opened her eyes to see that she was at Reed’s Sporting Goods standing in front of the fish finder display! “You shouldn’t have” she said. “No, I insist, you are worth it”, I replied and started going through the features of each with the salesman. I guess she wanted her Mother’s Day present to be a surprise as after 20 minutes she turned to me and said “I’ll be in the women’s section”.

I picked out the perfect unit for her, the Garmin 93 SV in ultra-high definition of course! The salesman asked if I needed anything else and I told him that my wife is so special she deserves the portable kit, the Canadian Lakes Map chip and of course the optional lithium battery! He gathered up all the components and had someone ring me up. Once the transaction was complete I went to find Barb. Sure enough, she was in the women’s section looking at purses. She turned to me and said with a deadpan expression on her face and said “I’m getting this purse”. I thought it was kind selfish of her to want a purse on top of everything else I just bought her and told her “But Honey, I just bought you all this stuff?”. She repeated, “I’m getting this purse” and walked off towards the cash register. Some women, they just never get enough! 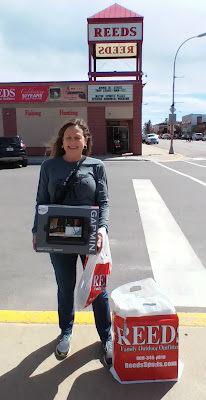 You may have noticed that Barb's eyes were closed in that picture. That is because she was crying as we left the store and most of the way to our next destination. She was so overwhelmed with joy by her gift, she just kept muttering "What did I ever do to deserve this". Me, I too had a tear in my eye for making my wife so happy.

That evening we landed at the Grand Portage Visitors Center just a couple hundred yards from the Canadian border. They have a beautiful waterfall there so after setting up in the parking lot we took the dogs for a hike to the falls. 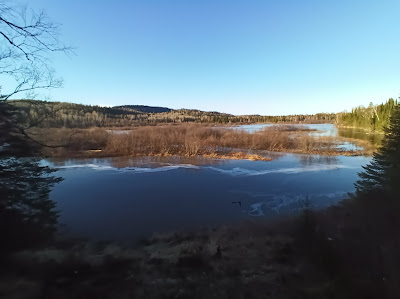 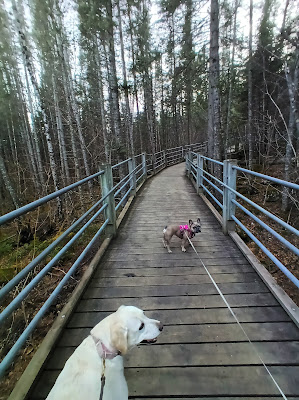 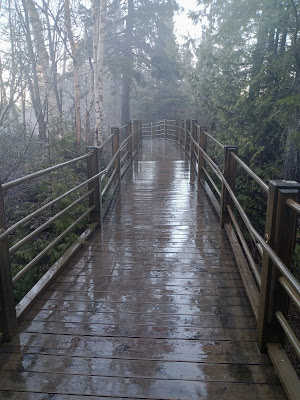 The water was so high and falls rushing so fast that the overspray made it so like it was raining all over us. Very cool!

At 120', the High Falls are the largest in Minnesota. We spent the night in the parking lot/truck stop where the crickets and frogs sang us to sleep. When we awoke the next morning we headed to the border crossing.  After our last crossing where we were everything but probed we were a little nervous but this one was a breeze and we were on our way in two minutes.

30 minutes later we were in Thunder Bay where our first stop was….. 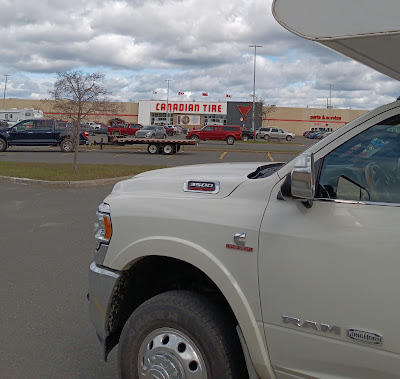 And our second stop was…… 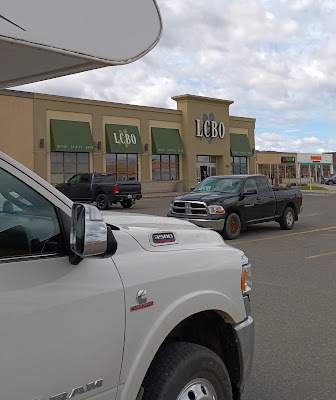 Then it was back in the truck for two more hours until we reached our final destination. 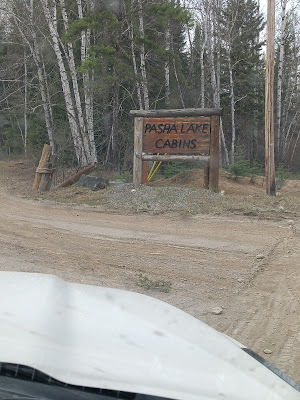 We will be here for the next 2 weeks or so. Bring on the walleye extravaganza!

Posted by Jim and Barb's RV Adventure at 6:30 AM