Brrrrr! That's the best word to describe our first week at Pasha Lake Cabins. Thankfully, we do not let a little cold stop us from having fun! 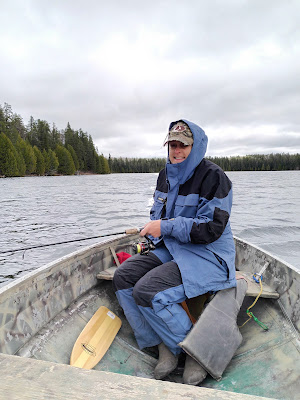 You will notice one thing missing from our pictures this week. Fish! There are two reasons for that. One is that walleye is not open until May 21st and the second is that the perch that we were seeking just did not cooperate.
The first adventure was to Onaman Lake. For those of you have read about our adventures on this lake before, you will remember that it is a walk-in only lake about 1 1/2 miles from where you park the truck. However, before and after fishing season you can drive 4 wheelers in there. The mission for the day was to bring the boat motors in and build some new dock ramps for the boats. Chad and Ian do all the work, I am just there for moral support.  There is more water up here this year than we have seen in a while so it was a wet and soggy mess.
But the fun started before even arriving at the lake as the roads were flooded in several areas. This was the worst of them.
They loaded up Ian's 4 wheeler with lumber as well as a boat trailer to bring lumber in and a boat out. Chad was going to ride on top but we decided it was just a little too sketchy. 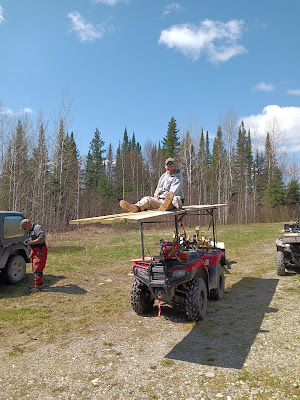 Off they went down the trail..... Overall, it is fairly dry with only a couple of wet spots. Until they got to this area...... There is a boardwalk, which Chad took with the motors but with the boat trailer, Ian had to take to the water. 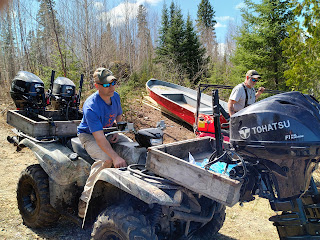 After a few hours work they had the boat ramps built and in place and motors. 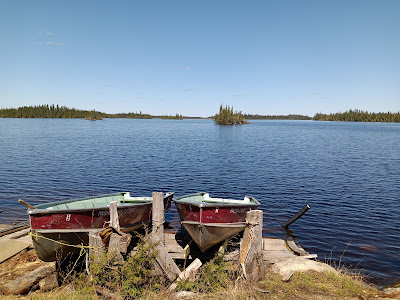 The next day they did the same thing at another lake.  The motors are brand new so they had to put oil in them before we fired them up. 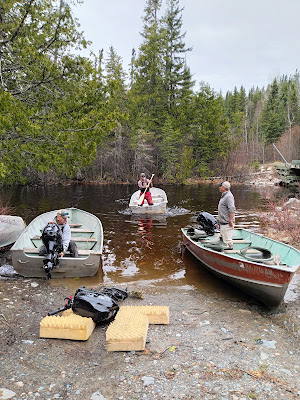 Meanwhile, back at camp, Barb was busy going for walks and practicing with her accordion. She is working on a couple of new songs but will not let me video her yet. Their walks are anywhere from 1-2 miles. The roads are usually very desolate but this year they are logging in the area so you have to be careful of logging trucks speeding down the roads.

Pasha is in the background on the picture on the right.
She also got a painting lesson from the housekeeper Judy. Do I maybe see a new hobby in her future?!? 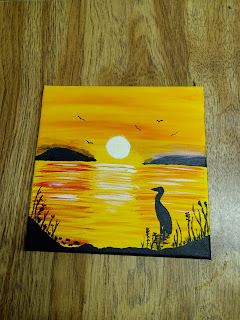 I have several requests for a picture of the purse Barb so selfishly bought last week. Why anyone would want to see a picture of a purse I have not idea, but here it is. 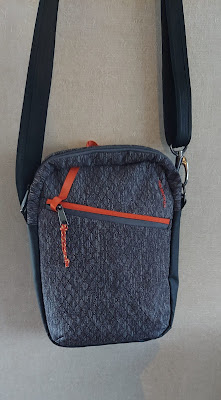 She is a minimalist when it comes to a lot of things, purses included. Just big enough to fit her wallet, phone and a few other things.
Today is walleye opener and we are going out with Chad, Michelle and their daughter Carmen. Michelle and Carmen are up for the weekend to get the cabins ready and welcome the first round of guests. As I write this at 7:30am (eastern time), it is 34 degrees and we roll in 30 minutes. Wish us luck!
Posted by Jim and Barb's RV Adventure at 4:37 AM