Dogs are so weird. I don't think we could have two more opposite dogs. One big, one small. One outgoing, one shy. One who loves to play, one who loves to just sit and watch the world go by. Dakota was basically raised in a concrete kennel the first two years of her life before we got her. At 2, she had not been in a car, house, or climbed stairs. As some of you may recall, we had to build ramps to get her up stairs and into cars. Although she no longer needs ramps, she still panics when she climb stairs or get into cars. She just panics and does not use her head at all. Forget slippery floors. She either will not go on them at all or she panics and wheels out trying to get to her destination as fast as she can feet and legs flying everywhere.

Zoey on the other hand is the complete opposite, being held and nurtured since the day she was born. She is trusting, fearless and not scared of anything. She will greet anyone with a wagging tail and lick every part of your face if you let her. 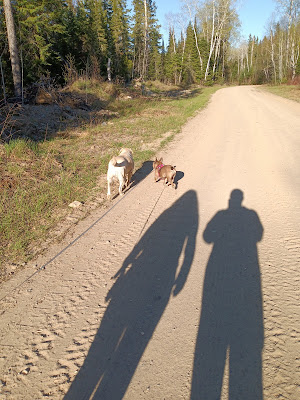 There are two things that really strike me as odd though. One is their bathroom habits. Dakota will go anywhere. Well, not in a house thankfully, but anywhere outside. Concrete, blacktop, you name it and she will stop and go. Many times right at your feet. More than once we have been embarrassed as we are walking and we stop to talk to someone and boom, squat time! I am sure that has everything to do with being raised in that kennel.

Zoey on the other hand is a secretive squatter. Especially when it comes to #2. She has to go off into the woods or the tallest grass around, look back to see if you are watching her and then squat. If you are watching her, she won't go! Do you think she was a human in a past life? Once she is done with her business she will often stand and stretch one leg back as far as she can, then the other and return to us. Daisy used to kick the dirt over where she went. I know a lot of dogs do that but do not quite understand the meaning.

The other thing that strikes me as odd is how Dakota greets people. She is very wary. 80% of the time she just ignores people and avoids them until she gets a feel of whether they are friendly or not. Then she will slowly come up for a pet or sniff. 19% of the time she will wag her tail and come up to someone right away sensing they are no threat at all. Then there is the remaining 1%. This has only happened twice in the past 5 years, so maybe it is even less than 1%. The second time was this week. In these two cases when the person entered the room Dakota's hair went up and she growls the entire time the person is there, never looking at them but never taking her eyes off of them at the same time. And she will not leave Barb's side often staying between Barb and the person (To hell with me apparently). She will not let the person touch her or even get within a few feet of her. We thought that maybe it was a man thing but this last time was not a man but a teenage girl. Weird huh? I don't think the person noticed in either instance but it was interesting to watch!

Sorry, Dino and Harry, I have no video for you to watch of either this behavior or the bathroom habits.

Fishing this week has been better but not great. With water temps in the upper 30°'s and low 40°'s, plus it being spawning season, these fish as just not real active. We have gotten out several times however managing to scrape up a limit of walleye each time. As I said at the end of our last post opening day was cold at a mere 34°. We went out with Chad, Michelle and Carmen (11) who were in one boat while Barb and I were in another. We loaded up the boats, hit the water and....it started snowing like crazy! 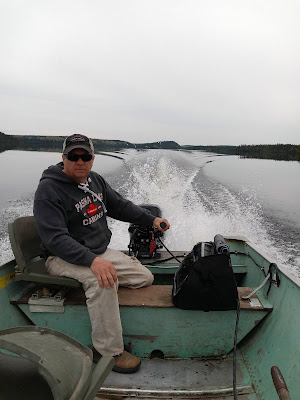 Barb's new fish finder works great! I should have bought her one years ago. She asked it she could have it at the front of the boat next to her but sadly, the cord is not long enough to reach the front of the boat so it has to remain in back with me. (Little does she know that the cord is plenty long enough but I have most of it zip-tied into a bundle where she cannot see it.) 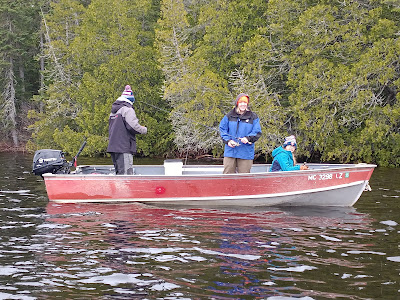 The lake stretches about 11 miles long by 1 mile wide. We were for sure the first ones on it for the year and, with the lockdowns, probably 2 of less than 100 in the past several years. The local loons were very curious and hung out with us several times during the day.  Nothing like the sound of loons on a remote Canadian lake! 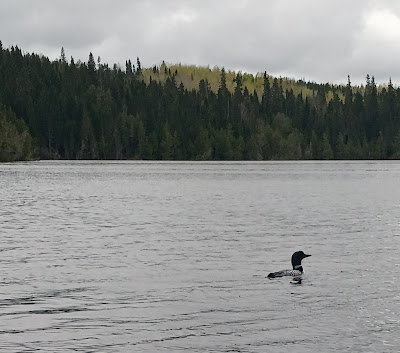 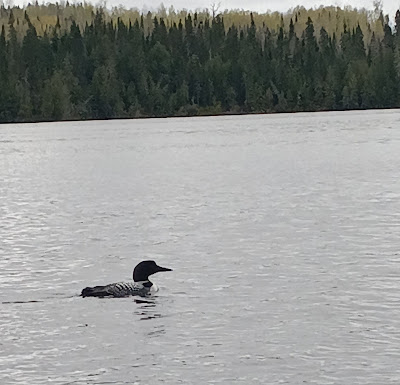 We hit all of our favorite spots, but they were neither super hungry or concentrated. We  picked up one or two here and there but not the numbers we are used to. 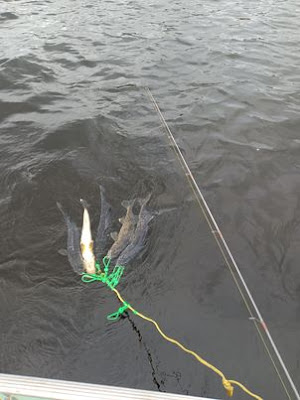 When we had our limit we headed back to find Chad and Michelle as we went in different directions at one point. When we found them it looked like this.... 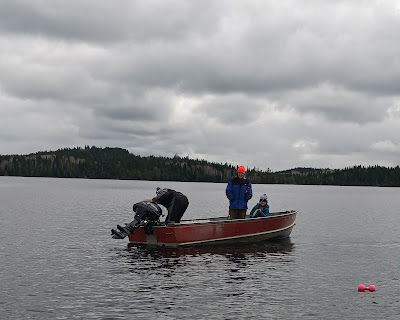 Engine problems?!?!? These motors are brand new they should not be breaking down! Upon closer inspection we found that the buoy string had become wrapped around the propeller. 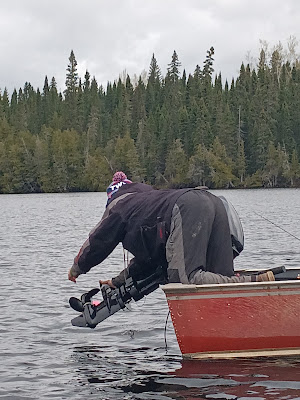 Chad had somehow convinced Michelle that it was her fault as she accidently hooked the buoy with her fishing line but any experienced fisherman knows that the responsibility of keeping the buoy line out of the prop falls on the person operating the motor. Always!
After 15 minutes or so, they had it untangled and were ready to roll again. That is when we made this fancy video showing off their new electric start motors!
As you can see, they have a great sense of humor and are fun people to hang with.
So, I know many of you are wondering how badly I am out fishing Barb this year. Well, lets just say. I have turned over a new leaf and no longer feel the need to keep score. No need to tally who caught the biggest, who caught the most. I am out there just for the joy of fishing, enjoying nature and spending time with my wonderful wife. In fact, I think it is real petty to keep track of size and numbers. Who would do that?
I'll tell you who....Barb! Remember a few weeks ago when I wrote The Joy's of Grandparenthood? And how competitive our daughter and granddaughters are? Like the time our granddaughter Kendall shouted out "It's 14-2" during a soccer game they were not supposed to be keeping score. How, oh how, did they become so obsessed with winning all the time? The answer came to be again this week as Barb reminded me of the "fish score" every time she caught a fish. "5-0", "6-1", ...."7-1". She would stand up and shout it to the world, like anyone was with 20 miles to hear her anyway. Quite annoying actually. At the end of the day she reminded me by saying some smart@ss comment like: "Remember when Kendall shouted out "It's 14-2!" at the soccer game?" I replied "Yeah, that was cute and funny". Barb then says "That's what our fishing score was today". I did not find that so cute.....or funny. 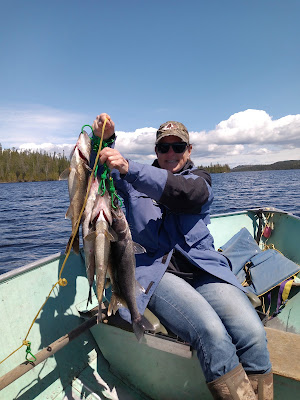 In my defense I was operating the boat making sure we stayed on the good spots and playing with my, I mean her new fish finder. As a matter of fact, here is proof of one of the fish that I almost caught. You can see how the colored line starts at the bottom and goes diagonally towards the top? That's me pulling a fish off the bottom and reeling it to the surface. Sadly, you see the  colored line get to the top and then go right back down to the bottom. That is the fish getting off the hook and going back down. 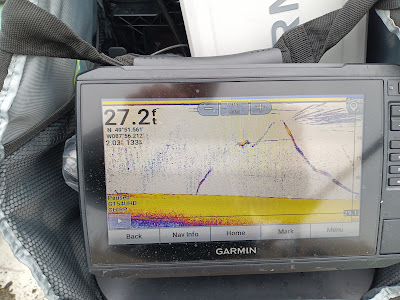 The next time we went out I did much better and held my own. After 3 hours of fishing she was one fish up on me. With a self imposed quitting time of 3:00, I had 10 minutes at our last spot to catch one to tie, or 2 to win the day! Or would she catch another one and go further ahead of me?  With less than a minute left, I hooked one, landed it and did the happy dance! Barb said "What are you so happy about?" I said "We tied today!". Then the replied, "Yeah, well, overall it is 24-11". With that I tucked my tail, started the motor and headed for the boat ramp.
Posted by Jim and Barb's RV Adventure at 3:26 PM