Barb and I have lived in some small towns in our lives. Communities as small as a couple thousand residents. But we have never experienced a community as small as the ones here in northcentral North Dakota. Douglas is the smallest town in the area at just over 100 people. No schools, no stores, one bar, and one church. Max is the next biggest, about 10 miles away, with a population of ~300. No grocery store, one gas station, two bars and a couple other businesses and churches. If you want groceries, you need to go to Garrison with a population of a whopping 1,700 but you will have to drive about 20 minutes to get there. There are definitely pluses and minuses to living in a smaller community. The pluses are too many to list, like always pulling together in times of need. The downside is everybody always knows what you are up.

My graduating class back in the day was about 300. Small by today’s standards but huge compared to the classes at Max where Chris and Holly’s kids go to. When I asked Holly how many kids were in Gavin’s 3rd grade class, instead of giving me a number, she named each of the kids. I think it totaled 10 or so. Then there are the class reunions. All of the Finken kids graduated from Max high school; 2004, 2006, 2008 and 2015.

Bob graduated from Max as well (DeAnne graduated from Garrison). It would be impolite for me to mention when they graduated but I am pretty sure Bob graduated shortly after the wheel was invented. They do not have class reunions by years here, they have “All Class” reunions, meaning all graduating classes have their reunions together on the same day. Chris and Holly’s oldest son Gavin is now 8 so when he graduates in 2033, there will be three generations of Finken’s at the same class reunion!

On Sunday, Bob, DeAnne and I went to a chicken supper with neighbors (10 miles away) Tim and Linda. We drove to the Catholic Church in Underwood 40 miles away and even there they knew everyone. They even had people coming up to them asking who the “new guy” (me) was! 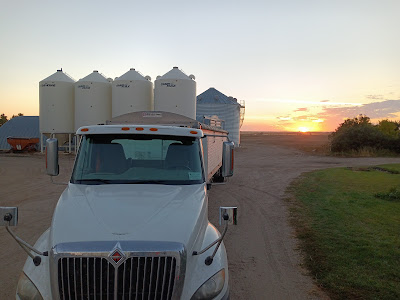 When I last left you I was harrowing wheat fields getting them ready for next year. Well, not a lot of harrowing has been done in the past week as I broke it. I went to fold up the harrow to move to the next field about a week ago and only ½ of it folded up. Upon closer inspection the problem was obvious. The joint on the right wing was totally broken.

It looked like a bugger to fix. A pin, approximately 2” x 10”, had partially fallen out causing a portion of the joint to crack and bend. Fixing this would require heating, pounding, grinding, cutting and eventually welding everything back into place in a precise position so the pin fits back into place through both pieces. 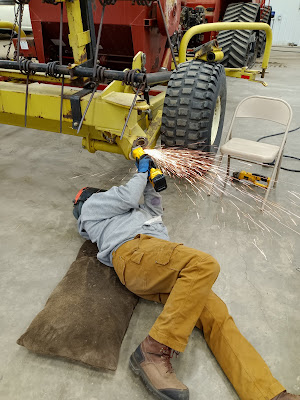 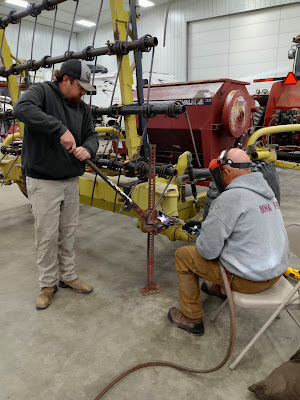 But if anyone could do it, Farmer Bob could so he set out to tackle the task! Several hours, (more like 5 hours) Bob had it all lined up so the pin slid in and out of place and he welded it back together.

The next day we hauled the harrow back out to the field, got it all lined up to the section we left out in the field, lined it up and pounded the pin back in to place. The big test will be to see if the weld holds. Time will tell on that one!

If there is a bright side, it broke right before it rained so we did not lose any time out of the field. I spent the next few days finishing up the tree rows and working on the combines. This time I was replacing the skids on the bottom of the headers. These skids help protect the header from the ground and rocks as the combine goes down the field. You can see there are two skids missing from the header in the picture below. 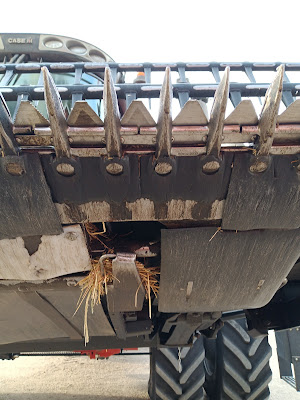 I replaced 20 or so on the first combine and 16 on the next. 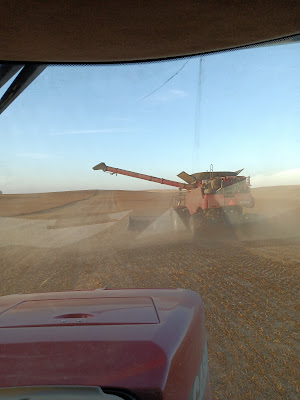 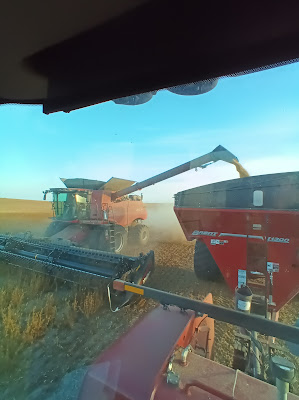 I then take the cart over to the semi and dump into the semi. Then take the semi to the farm and dump into the grain bin! The combine holds about 15,000 pounds of beans, the cart up to 70,000 pounds and the semi about 54,000 or so. The semi will actually hold more but it gets too heavy. So, if you are driving down the road and see a combine in the field with a light flashing on top you now know they are full and need to dump their grain! 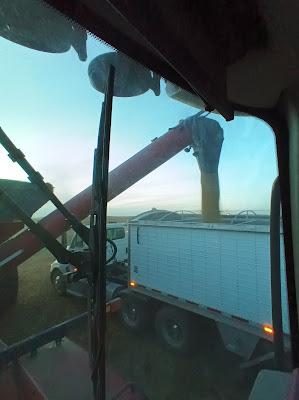 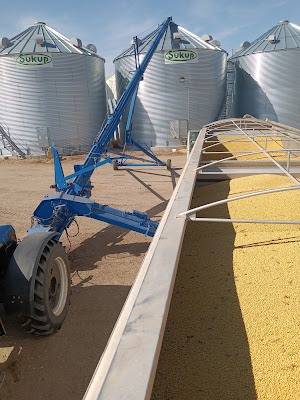 Friday was homecoming day in Max. I did not go to any of the festivities but Bob and DeAnne did partake in the parade. Bob drove his '51 Farmall Super C and DeAnne drove the latest addition to the family, her ’66 VW Bug!

Meanwhile back in South Dakota Barb has not slowed down at all. After finishing the bed project, she set her eyes on the kitchen/living room area. She bought a couple of end tables for the living room. These cool whiskey barrel tables fit our décor perfectly!

Then one day I was scrolling through Facebook Marketplace and came across these stools for sale. I thought “those look like the stools we have in our kitchen”. It was then I noticed those are the stools we have in are kitchen. Or should I say were as she sold them the next day. Apparently, she has a different idea for stools.

She ended up selling them to a woman who responded to the add that lived about 1/2 mile down our road!

Another day she got a message from a friend of ours back in Minnesota who was going to be in the Custer area with her brother. We have not seen Kay in over 10 years. They stopped by the house for an hour or so. I just wish I was there to see them as well! 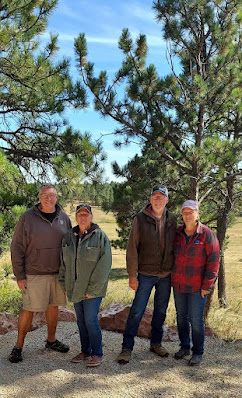 But alas, I am still here for another 10 days or so slaving away while Barb is back there spending money like a drunken sailor. But as I write this at 5:00am on Saturday morning I am anxiously awaiting sunrise. Today the duck opener here in North Dakota and we are headed out in an hour or so!

Our thoughts go out to those impacted the hurricanes in Florida and Prince Edward Island. My sister Judy owns a place in Fort Myers a few miles up from Fort Myers Beach. Although they are well off the beach the surge reached their house resulting in over 2' of water flooding their house as well as a couple of palms falling on their lanai.

Then there was Fiona that hit PEI and New Brunswick. Many of you will remember this sea stack in Thunder Cove on Prince Edward Island named the Teacup that we saw a couple months ago. Well, I guess it is no more. 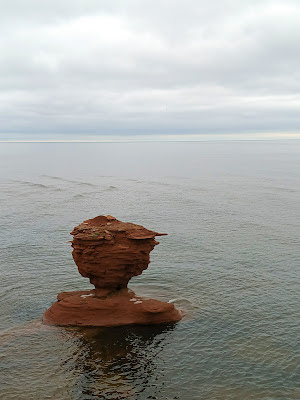 You can read Marie's blog to learn more about the impact from Fiona.

Last but not least, here is a picture for Pam in Arizona (opps, I've been corrected, Pam lives in Nevada and I knew that!!!) who give me heck every time I post a blog without the dogs in it! 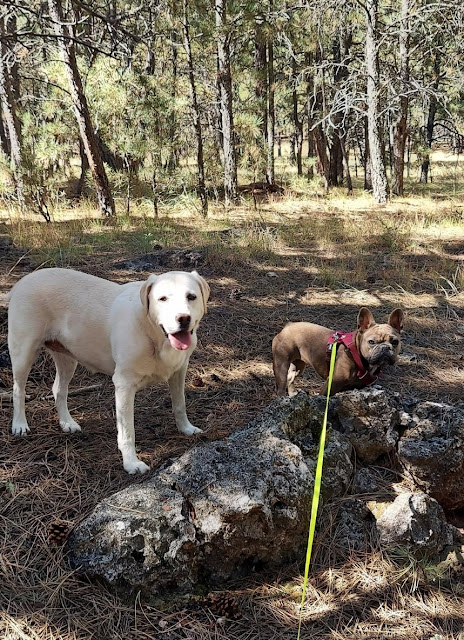 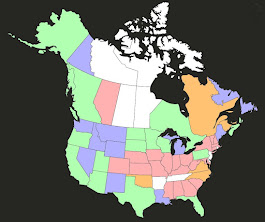